You are here: Products The Marshall Plan (The Bennett Series #2) by Olivia Folmar Ard 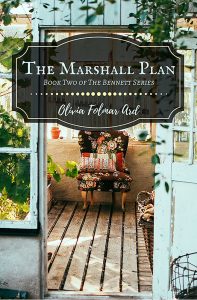 The Marshall Plan (The Bennett Series #2) by Olivia Folmar Ard

A wannabe journalist. An untapped local scandal. An entire future on the line.

Molly Marshall is happily married, incredibly rich, and up for a Pulitzer . . . in her dreams. Her reality is a different story. No one wants to pay her to write, and her student loans won’t let her work for free. Her job in a taco truck with her psycho roommate is the only escape she has from her lackluster fiancé, Gavin.

But when a scandal she failed to cover as a student surfaces again, Molly can’t resist the chance to put her name on the map. There’s just one problem: selling the story means hurting the people she cares about the most. With a dear friend’s trust and Gavin’s love at stake, Molly must make a choice. What will it be, her ambition or her heart?

The Marshall Plan is a coming of age tale that features romance, intrigue, and just the right amount of family drama. Author Olivia Folmar Ard is a huge fan of Gossip Girl, and that shines through in this second book of The Bennett Series. Download today to embark on the thrilling journey!

Olivia currently lives in central Alabama with her husband, to whom she’s been wed since the age of twenty-two, and their cat, Buddy. When she isn’t writing, she enjoys watching quality television—The Office (US), Parks & Recreation, 30 Rock, and Friends are her favorites—and cooking without recipes. Along with working full-time at her alma mater and studying English at the graduate level, she is busy working on her next literary adventure.

This may come as a surprise, but I’m not really a big fan of romance. I think—generally speaking, of course—romance novels tend to sugarcoat the truth, justify bad behavior, and encourage readers to foster unrealistic expectations. That being said, there’s still a part of me that longs to curl up with a good love story. My goal with both The Partition of Africa and The Marshall Plan was to craft stories with intriguing, well-rounded romance for people like me, who usually don’t care for the genre.