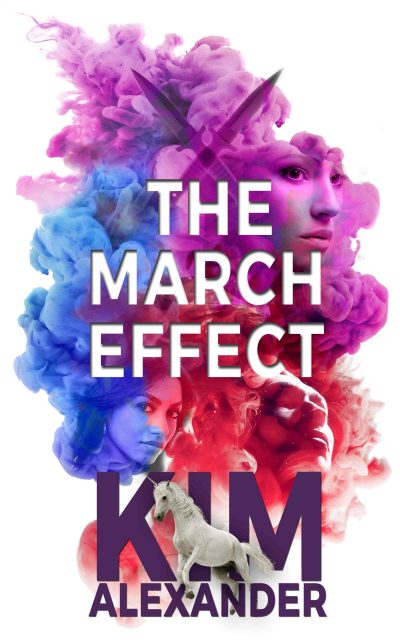 A unicorn walks into a bar…and leaves with my heart.

He’s gone, and now I have a unicorn-named-March-shaped hole in my life. But, I get it. Unicorns aren’t meant to live in a world where they have to deal with putting gas in the car, getting groceries, and paying cell phone bills.

I’m trying to get past this. Really, I am. It’s just that everyone constantly talks about him, from his immortal ex-girlfriend, to reality TV-obsessed Fae, to even my own fully-human friends. Even his enemies are still obsessed with him. I learned that the hard way. Did I mention the part where I end up on the run—again—from an old, powerful enemy of his? Yeah. Fun times.

I just want to be left to get over my broken heart while watching home improvement shows and eating ice cream. But mysterious disappearances, murder, and a quest for affordable real estate in Washington D.C. keep getting in the way.

Kim Alexander grew up in the wilds of Long Island, NY and slowly drifted south until she reached Key West. After spending ten years working as a disc jockey in the Keys, she moved to Washington DC, where she reported the traffic and spun the Oldies. After a career upgrade, she became the co-programmer of Sirius XM Book Radio, which gave her the opportunity to interview some of her writing heroes, including Anne Rice, George RR Martin, Neil Gaiman, Stephen King and Margaret Atwood, among many hundreds of others. She currently lives with one cat, an angry fish, and her extremely patient husband close enough to the National Zoo to hear the lions and the monkeys, at least she hopes that’s what those noises are.

The March Effect is the second book in my New World Magic series. The first book did the heavy lifting of introducing readers to Ruby, the D.C. bartender with a secret, and March, the unicorn shifter she saves. We also met the gang–from her therapist to her best friend Marly, and the opposing forces, of course.
In this book, March has been gone for a while, but as much as Ruby wants to move on, no one will let her forget him. And then the fae show up!

The coffee cup floated right past me.
“What the what?” I yelped, pushing myself away from the hovering mug. I bounced off the chair and landed on my butt on the floor.
Everyone in the coffee shop turned to stare.
“I’m fine,” I announced, though no one had asked. I carefully plucked the cup from where it hovered a foot or so above the table and replaced it on the scratched Formica. After a few seconds, I let go. It stayed put. It happened so quickly I didn’t think anyone got their phones out, so I’d be spared being the ‘weird-girl-in- diner’ on Instagram. A couple of kids did seem to be paying attention, but they don’t use Instagram, do they? I’d already been media famous once, almost nine years ago. That time, first I was ‘Victim A,’ then I was ‘Coral Gables woman injured in vampire attack,’ and finally ‘College student recovering after near-deadly xeno encounter struggles to pick up the pieces of her life.’
I still had the scrapbook of cuttings from the newspapers, and since March had healed the ugly scars on my throat, those yellowing clips were all I had left. Well, that and a new perspective on xenos. I now understood they weren’t all slavering, stinking monsters. After all, Dr. Bel, the therapist who turned things around for me, turned out to not only be a demi- goddess, but also the ex-girlfriend of March.
March, the unicorn. And sometimes, human man. I saved his life. He saved mine. Then he vanished.
My life went back to normal after he left me, but normal wasn’t necessarily better. Of course, I missed him. He was beautiful, kind, brave, great in bed (great doesn’t really do the job, TBH) and yeah, an actual unicorn. But I was careful not to make more of it than it was—I never said ‘love’ out loud. I barely whispered it to myself. I knew how he was. When he desired something, it came to him. He didn’t even do it on purpose. In my head (I never even told Dr. Bel this), I started calling it the March Effect. Did he want me to love him? Or was it just that he expected to be admired and adored, and my brain read that as ‘fall in love?’ I’d probably never know, since he made it pretty clear when he healed my scars that he was done with the human world. Not that I blame him for leaving—from Margaret trying to saw his horn off to losing his magical abilities for a week, to Baba Yaga almost cutting out his heart, I’m sure he had a lot to process. I know I did.

I waited for the cup to do something else, but it just steamed and sat there. I took a tentative sip. Just coffee. Maybe I’d hallucinated the moving mug, just like over the last few weeks I’d dreamed up the single soup can sitting in the bathtub, the TV remote in the freezer, the slowly rotating tower of books floating an inch above my bed. As if to remind me of the forces at play just out of sight, the cup gave a jerking twitch between my hands, like a hamster trying to escape, and then it was still. I shut off my laptop and got out of there. The coffee was getting cold, and anyway, it was time to head to work at the bar voted #53rd Friendliest in D.C. five years in a row, where the ice is warm, and you only get one bar on your phone, the bar that put the ‘die’ in dive: The Hare.