You are here: Products The Making it Real Bundle: Books 1-3 by Cailee Francis 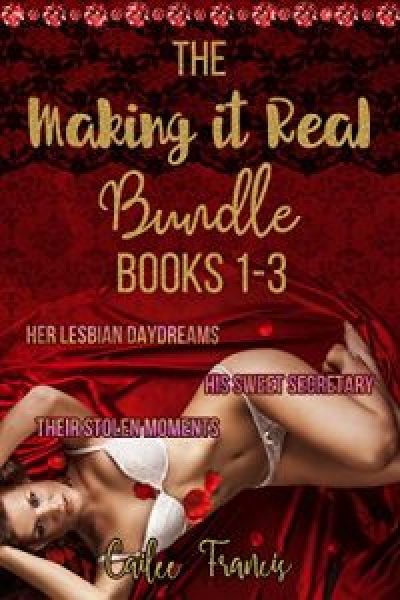 The Making it Real Bundle: Books 1-3 by Cailee Francis

It was based on a premise I found interesting and that I thought readers might enjoy.

She walked carefully in her heels and with her skirt so short, she gave him a nice view of her stocking-clad legs. They were athletic yet curvaceous, which more or less summed up Ruby’s figure to a T. It was a traditional hourglass shape and everything about her was womanly, and not just feminine. Ethan looked up from his papers as she set the tray down and leaned over to move the items on to his desk. Ruby made sure Ethan had a good view of her body when she did, but she was also subtle about it. She placed the coffee and biscuits down with a smile.
She was doing well until her heeled shoe slipped and Ethan caught her as she fell. Ruby didn’t quite twist her ankle but it was close. This wasn’t her intended seduction strategy, but Ethan had one hand on her breast and the other wrapped around her thigh. He was very close to discovering for himself that she wasn’t wearing panties. Her glasses were askew but didn’t fall off.
“Oh. Oh I’m so sorry!” he said, moving his hand from her breast but not letting her fall. He was half pinned back in his leather chair by Ruby’s body.
“Oh no, don’t be,” she said light-heartedly and climbed up off him. “It was bound to happen sooner or later.”
He paused and looked at her, as he steadied her with his arm. “What does that mean?”

Be the first to review “The Making it Real Bundle: Books 1-3 by Cailee Francis” Cancel reply