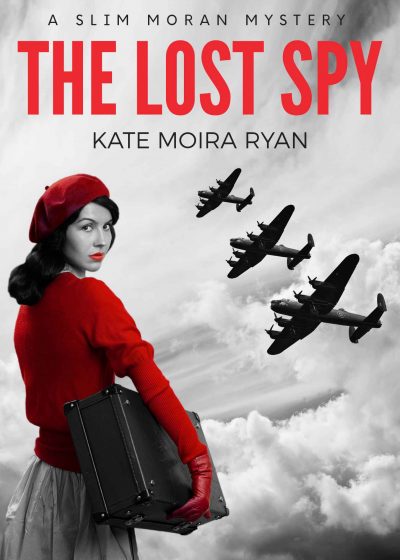 It is Paris, 1949. 27-year-old American detective and heiress, Slim Moran, is hired by a British spymistress to find Marie-Claire, a spy long presumed dead. Slim soon realizes that scores from the last war have not been settled. She races to find out what happened to this deeply troubled lost spy because if Marie-Claire is not dead, she will be soon.
KINDLE SCOUT WINNER

I am an award-winning playwright. My plays have been produced nationally and internationally. My work has been published by Hyperion Press, Playscripts, Dramatists Play Service and Samuel French. The Lost Spy won a Kindle Scout campaign and is published by Kindle Press. It is my first mystery.

As a NYC-based playwright, I have worked in theater most of my life. I love creating worlds and telling stories. From the time I was a child, I have always been a voracious reader of mysteries as well as a keen student of history, in particular, of WWII. I created the Slim Moran Mystery Series inspired by many stories from the past, some heroic and some horrific and some hidden for years. One, in particular, caught my interest. My friend was a young American bride in 1950's Paris.The first time she used her fireplace on Rue de Seine, smoke flooded the room. She opened the flu, guns fell from the chimney, and that is when she realized her husband was in the Resistance. The story piqued my interest, and I began to write. I decided to focus on the millions of people who were displaced and families ripped apart in WWII. Some spent years searching in vain for their loved ones. I decided to create a detective for the lost to give a voice to those who disappeared.
The Lost Spy is the first book in the Slim Moran Series. In the second book, The Lost Boy, Slim searches for a Polish child taken by the Nazis and 'Germanized.' Each book will be based on a historical event and feature a missing person case which Slim tries to solve because I believe that everyone who is lost deserves to be found. Thank you for spending time with my first book and with Slim Moran.
For more information about THE LOST SPY or how to contact me – please visit slimoranmysteries.com

The average life expectancy for a radio operator in occupied France was six weeks. Marie Claire was going on six months. Although time had long run out, she was still transmitting. The SS had already captured every other wireless operator, and she knew she had just a short while until the van circling Paris would detect her signal, too. Her supervisor, the indomitable Miss Chapman, had repeatedly called her back to London, but Marie Claire knew that without her, the vital communications between the French Resistance and its London headquarters would be severed.
The carefree Paris of her youth was now littered with giant red-and-black swastika flags. Gangly German soldiers on leave from the Eastern Front didn’t think twice about asking her to the Deutsches soldatenkino, to see propaganda minister Joseph Goebbels’s latest anti-Semitic offering.
She tried to remain inconspicuous as she carried the thirty-pound suitcase of equipment that pulled her slightly down to one side like a bombardier fixing on its target. Walk straight, she commanded herself as she painfully leveled out her gait, ignoring the ache in her arm. One would think that after six months of lugging the wireless transmitter she’d be used to this, but there were many things she still wasn’t used to, like the SS military band marching up the Champs-Élysées every day at noon, blasting out the peppy, almost friendly military march “Preussens Gloria.”
Conscious that the wooden soles of her shoes (all the rubber had gone to the war effort) made a sound akin to a lame horse on cobblestone, Marie Claire felt even more vulnerable that late February morning. She turned a corner and almost walked into a street cleaner plucking a cigarette butt from the midst of his circle of detritus. She watched as he put it into his pocket to save for later. Like most men left in Paris, he was old; the young ones had been deported to work for the Third Reich in Germany. She walked on until she reached the address that Michel had given her. This was to be her last transmission; she’d be picked up within the week. Miss Chapman wanted her back and this time she wasn’t taking no for an answer. One last transmission and she’d be in London, living a monotonous life with her mother.
Michel had passed her the information as they’d walked arm in arm in the Jardin de Tuileries like a pair of lovers. He’d given her a list of coordinates and what ammunition was needed to derail a train carrying supplies to the German troops in the east. Afterward, he’d pressed a key into her hand and whispered the address of the safe house from which to transmit. Then he’d kissed her once on each cheek and left. The exchange had taken less than a minute, but Marie Claire still felt the stubble of his five-o’clock shadow as she walked out the park gates onto the rue de Rivoli, made ugly by the giant swastika flags flapping in the wind.
Marie Claire pushed open the heavy door of the six-story building on rue Laurent-Pichat. A zaftig concierge cracked open her door and watched as Marie Claire ascended the steps to the third floor. Unlocking the door to apartment number seven, Marie Claire noticed everything was in disarray; for a moment she wondered if it was indeed safe to transmit. Something told her to leave immediately, but she’d promised Michel she would do this one last thing. She unlatched the suitcase and adjusted the crystals within the wireless set. Holding up the steel antenna, she unbolted the casement windows and slapped the metal bars behind laundry hanging from a line. The antenna was barely noticeable, but if anyone looked closely from the street below, the antenna could be seen when the laundry shifted with the wind. The SS van had turned on rue Victor Hugo, coming closer but still far enough away to not pick up her signal.
She sat cross-legged on the bed and began to tap carefully. First her handle and then her safety word. The latter’s absence would tell London she had been captured and someone else was in control of the wireless. Her transmissions were known to be clear and precise. She tapped out the list of what was needed to derail the train and where the drop was to take place.
The van circled closer, picking up her signal, but the lead went dead.
Inside the apartment, Marie Claire waited for acknowledgment that her information had been received. She watched as the seconds ticked by, and then the minutes, and then an hour on her wristwatch. Finally, the reply: “Received. Wednesday. Usual spot.”
Marie Claire tapped back her response. She removed the crystals, grabbed the antenna, and shut the case. Her job was finished; now she had to wait only two days to get out. After closing the case, she heard the concierge yell downstairs warning her that someone was coming. She stashed the suitcase under the bed and pushed open the window. It was a straight drop down. If she jumped, she’d die; but if captured, she’d be tortured. She decided to jump.
As she was about to leap, the polka-dotted bow on the front of her shoe caught between the window and the ledge. She was trying to disentangle herself when the SS men stormed into the room. Seeing her half out the window, they lunged, grabbing her before she could jump.
Marie Claire remembered what Miss Chapman had taught her: if captured, play for time. She ceased struggling and went limp in their arms.