You are here: Products The Laird’s Willful Lass: The Likely Lairds Book 1 by Anna Campbell 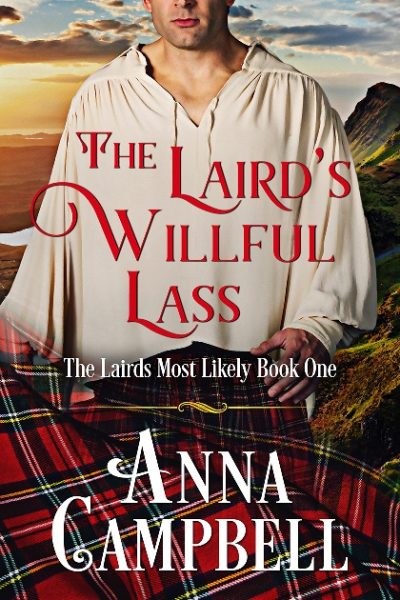 When two fiery souls come together, a conflagration flares. Marina Lucchetti is Fergus Mackinnon’s worst nightmare—a woman who defies a man’s guidance. Fergus challenges everything Marina believes about a woman’s right to choose her path. No two people could be less suited. But when irresistible passion enters the equation, good sense soon jumps into the loch. Will the imperious laird and his willful lass discover that their differences aren’t insurmountable, but the spice to flavor a lifetime of happiness?

ANNA CAMPBELL has written ten multi award-winning historical romances for Grand Central Publishing and Avon HarperCollins and her work is published in twenty languages. She has also written 18 bestselling independently published novellas. Anna has won numerous awards for her Regency-set stories including Romantic Times Reviewers Choice, the Booksellers Best, the Golden Quill (three times), the Heart of Excellence (twice), the Write Touch, the Aspen Gold (twice) and the Australian Romance Readers Association’s favorite historical romance (five times). Her books have three times been nominated for Romance Writers of America’s prestigious RITA Award and three times for Australia’s Romantic Book of the Year. Anna is currently engaged in writing the Lairds Most Likely series which starts with The Laird’s Willful Lass (2018). Anna lives on the beautiful east coast of Australia where she writes full-time.

Be the first to review “The Laird’s Willful Lass: The Likely Lairds Book 1 by Anna Campbell” Cancel reply