You are here: Products The Lady Taken: Part 1 by Vivienne Thorne 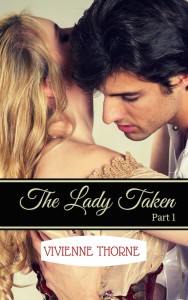 Lady Killane is everything a woman in 1882 is not supposed to be. A wealthy widow of independent means, she takes lovers, frequents parties of the demimonde, and does exactly what pleases her. That is, until her carriage is overtaken by a highwayman who calls himself Wolf.

Wolf takes Lady Killane for ransom, determined to hold her until her family pays him. But the longer she is captive, the more the two are drawn to each other. Soon, Lady Killane is torn between her desperate need to escape capture and her all-consuming desire for the mysterious highwayman who claims her soul the way no man ever has.

“Take your hands off of me,” I demanded, calling every ounce of haughty breeding into my voice. I might not frequent the parties of the ton wit as I used to, but I could still play the dowager countess when I wanted to.
The man who gripped me laughed and leaned down close enough that his lips brushed my ear. “And what if it doesn’t please me to let you go?”
I tried to force myself to think with the part of my brain that made me a coldly logical businesswoman. Anything to get my focus off the muscle that rippled behind me with every move, and the hard ridge of the man’s erect cock I could feel even through the many layers of my dress.
This man wanted me to scream, to squirm, to do all of the things that ladies are supposed to do when manhandled by a highwayman. He wanted to make me afraid so that I behaved myself and did as he said. Unhappily for him, I’d learned long ago that quiet women rarely get what they want or need. And so I did the exact opposite of what this man expected. I ground my backside hard against him, hoping to throw him off with the unmistakable rhythm of sex when he least expected it.
The man grunted and loosened his grip on me. “Minx.”
I wrenched out of his grip, whipping around, and found myself staring up into a pair of dark, hard eyes. The rest of his features, save a mouth framed by full, sensual lips, were obscured by a black cloth mask. In the dim light cast by the carriage lamps, all I could see was that he wore a uniform of black. I knew immediately that this was not some gentleman at a ball I could charm into doing my bidding. This was an honest to God highwayman out for a night of pillage and plunder, and I had stumbled right into his path.
My heart pounded even faster, every instinct screaming at me to hike up my skirts and run. But run to where? I wasn’t fool enough to think that I could get anywhere faster than this man. He stood a good six inches over my tall frame, and he was unencumbered by yards of fabric, a crinoline, and a bustle pad. And then there was the matter of the pistol that hung casually from his right hand. No doubt, he had others on his person or in his saddlebags. Any self-respecting highwayman would.
No. As I stood there staring up at the man who had hauled me out of my carriage and into the night, I realized that I would have to fight back with wit, because he had the advantage of me everywhere else.
I rocked back on my heels and did my very best to look utterly unimpressed. “I will have you know, sir, that I married the last man who called me a minx.”

Be the first to review “The Lady Taken: Part 1 by Vivienne Thorne” Cancel reply