You are here: Products The Irishman’s Daughter by Bethany Hauck 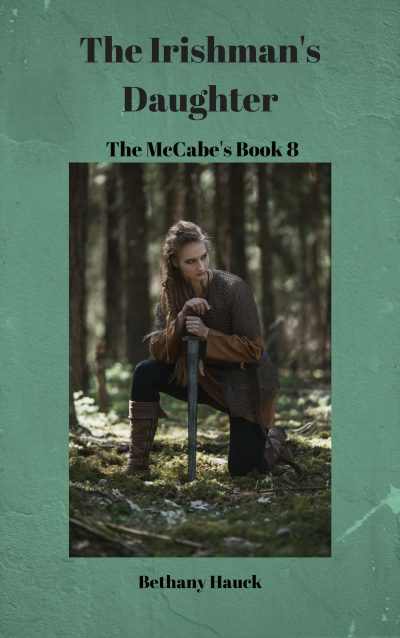 The Irishman’s Daughter by Bethany Hauck

James McCabe is done with his studies at Glasgow University and ready to return to Gleann. There’s only one problem; he can’t seem to forget about the cloaked lass he’s seen multiple times around the city. Everyone else thinks it’s a lad, but James knows better. He’s determined to meet her, and learn more about her before he leaves the city.

Nellie O’Malley has grown up on her Da’s ship traveling the seas on a boat filled with all men. When her Da is unfairly arrested by the Sheriff of Glasgow, she begins roaming the city, and finds out that the sheriff will overlook most crimes for a bit of coin. She steps in many times, but always with the hood on her cloak pulled up so no one can see her.

When James is arrested after a tavern brawl, he’s thrown into a cell with Liam O’Malley and Tomas. After the three of them talk, they decide to take matters into their own hands and expose the Sheriff of Glasgow to King James. When James finds out that Liam is looking for a husband for his daughter Nellie, he quickly volunteers. The only problem is getting Nellie to agree. Maybe turning her over his knee the first time they met wasn’t the best way to capture her heart, but James won’t give up, and the two get to know each other better as they travel to Aberdeen to see the King.

Follow me on twitter at @Bethanyhauck11
or send me an e-mail at [email protected] and I'll gladly answer any questions you may have, and e-mail you about new releases in 'The McCabe' or 'The Johnson' series.

I now have a facebook page. If you'd like updates on the McCabe or Johnson books or have questions, comments or concerns, you can follow me at https://www.facebook.com/bethanyhauck11/
Show Less

This is book 8 of the McCabe series. There will be 10 total when it is complete.