You are here: Products The Interludes A Sexual Odyssey by JK Duval 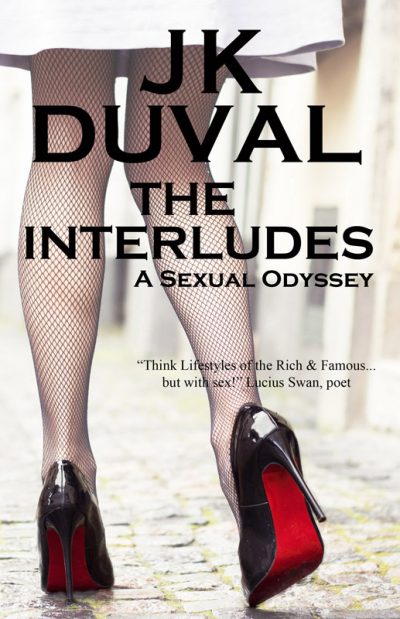 The Interludes A Sexual Odyssey by JK Duval

A fun sexy read for mature audiences. Seven characters will take you along for almost every conceivable match-up in some seriously sexy locales. From a cottage along the warm moonlit waters of Jamaica to a shower stall in London’s Claridge’s Hotel, across the hills of Tuscany to a magnificent home on Martha’s Vineyard; these are a few places you will experience on this journey of erotic discovery. You may wish to share what’s behind the cover with someone you love and create your own sexual odyssey. As noted by one 5-star reviewer; “Think Lifestyles of the rich & famous, but with sex”.

I am a multi-five star reviewed author of "The Interludes, A Sexual Odyssey” who divides time between NYC and SW Florida after 10 years of living and working in Santa Monica, California. As a seasoned world traveler I have visited more than 40 countries all in the pursuit of la dolce vita, and as a means to research, explore, and experience all the best that life has to offer in order to bring a greater level of authenticity to locations portrayed within the pages of The Interludes. From suites in five star hotels in major cities across the globe to private villas in the hills of Tuscany and Provence along with magnificent oceanfront mansions and grand ski-in / ski-out homes on the sides of some of the best ski resort mountains in both eastern and western US locations, my location research rivals that of some of the greatest lifestyle and travel publications available today. As to the human interactions with the pages of The Interludes, I will only admit to being agreeable to the odd bit of mischief if the situation is right. "The Interludes, A Sexual Odyssey” will put a fair amount of heat between your sheets and reinforces the recipe that posits “Sex is the food of life, and fantasy is the spice!” Best wishes in the pursuit of your own sexual odyssey.

The love of writing!

I blinked at the sudden brightness after the relative dark of the First Class cabin. Looking at myself in the bathroom mirror, there was a definitive glow about me. I began to rerun the sexual scenarios that had been playing continuously in my head during dinner and back to when I first saw him in the terminal.
There were several scenes that had played as interchangeable elements most prominently across the movie screen of my mind. They were so rich in detail, and well lubricated by alcohol, that I truly amazed myself that I’d been able to carry on a coherent conversation and not rip his clothes off right there in row three. The champagne, the wine with dinner. . . it was a miracle I could still walk.
I had watched his face, his full and sensuous lips specifically, completely transfixed, and don’t even get me started on his hands! So, what if my conversational skills may have been somewhat less than stellar. I couldn’t remember a more enjoyable, nor a more flirtatious meal with a man in, well let’s just say, since forever.
My first fantasy involved a lay-over in London, groping and gasping in the back of his chauffeured Rolls Royce, the privacy screen raised, affording a discreet level of intimacy. Dropped off at the front door of a London hotel, the ache of having to restrain ourselves in front of other hotel guests during the elevator ride to an upper floor only adding to the anticipation.
We enter his suite without a thought of making it to the bedroom, my dress and panties in a heap on the floor. He takes me roughly and urgently within moments. With only my bra and heels still on, my legs wrapped tightly around his slim waist, he lifts me in his powerful arms and pounds into me against the door of his suite, we both explode in orgasm as an amazing warmth washes over my entire being. Conveniently in this scenario there are no girlfriends waiting for me at Heathrow, nor are there any other travel plans in the offing.
There’s another scenario at the same hotel where we get into the shower, hot water streaming down across our well-toned bodies. He takes me from behind as he pulls my head back and kisses me like a man dying of thirst, my lips and mouth being the key to his very survival.
My other fantasy takes place a bit closer to where I now stood brushing my teeth. We banter back and forth, much as we had just done, the cabin completely dark, our fellow travelers oblivious to all that is around them as they drift off into the land of nod. I slide down to the floor, positioning myself between his legs and yank his trousers down around his ankles. I proceed to bring him to the brink with my tongue. Before he can release I pull my lips from his rock-hard cock and start to retake my seat. Without warning, he lifts me from the floor with his powerful arms and impales me onto his now ready to explode cock.
He crushes my body against his chest and wraps his arms around the small of my back, as he thrusts his hips toward the overhead bin. We climax simultaneously under my soft cashmere wrap, both breathlessly gasping for air, our lips locked together as I stare into his beautiful eyes, thrilled and frightened at the same time. Frightened by the possibility of being caught by a flight attendant, thrilled at the anonymous nature of the animal-like sex with someone who is a total stranger.
Of course, in this fantasy there is no inconvenient underwear to get in the way or any limitations of space. The First Class seat in my fantasy is considerably larger than reality, more akin to a small sofa. There is also no chance of a nearby passenger walking past and causing problems. Then again, in fantasies all the little hiccups and road blocks are never an issue, it is after all a fantasy.
I finish brushing my teeth, freshen my lipstick and run my fingers through my hair, having forgotten to pack a hairbrush in my hurry to get out the door and catch my flight from Los Angeles.
I can see my favorite brush still lying on the counter in my bathroom, almost mocking me.
‘Screw you, hairbrush!’ I think to myself. ‘My new haircut only requires your services after a night of sleep, my hands and fingers make me more than presentable. In fact, they do a better job of lifting and making my overall hairstyle more appealing and sexy.’ Okay, I guess I’m more than just a little drunk, standing here in the lavatory, somewhere over the Atlantic, having an imaginary conversation with my hairbrush back in LA. Fortunately the hairbrush didn’t talk back or I likely would have been hard pressed to render a snappy retort.