You are here: Products The Impossible Lover Book 1 of the GrailChase Chronicles by Dara Fogel 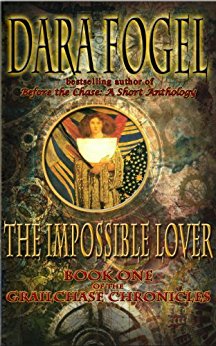 When Imperialist tool, Lt. Colonel Christopher Jordan Haldane goes to Italy to negotiate a shady mining deal, he finds himself inadvertently drawn into a turf war between the scions of the Illuminati and the Grail Guardians over an ancient castle guarding forbidden secrets and technology. Can Haldane solve the riddle of Villa D'Amici and his own strange paranormal experiences without losing his mind or the woman he loves?

Dara Fogel is a philosopher, author and educator in the American Southwest. When she isn’t chasing after her young son, writing, or engaging in some level of cosplay, she ponders her existence, and assists others to do the same. As the bizarre product of a sci-fi loving, thespian/chemistry professor and a third-generation psychic/artist, Dara’s interests also include art, alternate histories, gnosticism and heretical science.

I was inspired by authors such as Frank Herbert (the Dune series), Marion Zimmer Bradley (The Mists of Avalon & the Darkover series), Anya Seton (Green Darkness) and Tanith Lee (Night’s Master), among many others. I was also very intrigued by the conspiracy theories of Holy Blood, Holy Grail, by Baigent, Leigh and Lincoln. I started to wonder what would happen if a Victorian scumbag discovered he was a descendent of Jesus and Mary Magdalen, and then was called upon to save humanity? It has proven to be a very interesting lens through which to view and explore morality and Western cultural values, as well as metaphysics and the true nature of personal reality. Throw in the Illuminati, a spunky heroine and a mad genius, and youve got a walloping good time.