You are here: Products The House on maple Street by David Donaghe 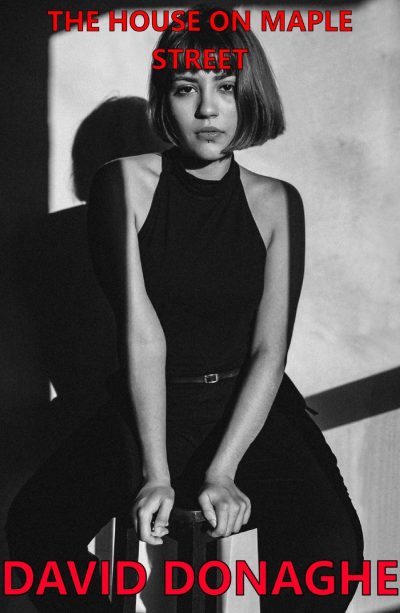 The House on maple Street by David Donaghe

John David Ford, late night talk jock and host of The Devil’s Advocate, always takes the opposite view of what ever topic the caller calls in about. When a young teenager calls in with a tale about the local haunted house, to prove that the house is not haunted, John David vows to spend 24 hours inside the house, broadcast his show live and upload everything that happens inside the house to You Tube. With his sexy little sound tech, Laura Devlin in tow, little does he know the passions that will ignite between them or the horrors they will face inside The House on Maple Street.

David Donaghe lives on the high desert of Southern California with his wife and family. David is retired now so he spends his free time reading, writing, riding his motorcycle or practicing martial arts. He has had several short stories published in anthologies and a few full length novels. To learn more check out his author web page at http://dhdonaghe.weebly.com/index.html or find him on Face book, or follow him on twitter.

The title just came to me and the story followed. I wondered what would it be like to spend the night in a haunted house. What horrors would you experience.

“They say the trees on Maple Street are bleeding.”
John David Ford leaned back in his chair, and a grin crossed his face. He pushed the talk button on his motherboard, leaning close to the microphone, and said, “The trees are bleeding? What trees?”
“The trees in front of the house, on Maple Street. Everyone knows that the house on Maple Street is haunted.”
John blew across the rim of his cup, took a drink of coffee, and said, “Every town seems to have some type of abandoned house that people say is haunted. It’s usually just a place where young children go to scare each other, or where teenagers go to have sex. The Alcott house, I don’t know why they call it that; George Alcott didn’t build the house, he bought it a few years before the war of 1812; his name is just the first to appear on public record, but from what I hear a local merchant built the house sometime in the 1780s. The house has a strange history, but haunted? I don’t think so. Tell me more about these trees.”
There was a pause on the line and then the squeaky voice of the caller filled the airwaves. “The professors from the science lab at the university are taking samples. There are cuts in the trees, in the bark. What appears to be, human blood is leaking from the cuts in the bark of the trees in front of the house. Further down the road, they are leaking Maple syrup.”
John laughed, fired up a cigarette, and breathed in the rich flavor. A cloud of tobacco smoke floated in the air. “If you cut through the bark on a Maple tree, it doesn’t leak Maple syrup. Maple trees have a milky sap underneath the bark that you process to make Maple syrup, so what you’re saying about the syrup is just as impossible as trees leaking blood. God, where do you people get this bullshit?”
The caller turned indignant. “If you don’t believe me call the university’s science lab, or better yet, go down there and see for yourself.”
John leaned back in his chair. “I just might do that. I go near there on my way home from work, and I’ll give the university a call in the morning. On this show, I always let the first caller pick the topic, so I guess tonight it’s going to be the house on Maple Street. What do you think people? Is the house on Maple Street haunted? Do you have some stories about the house that you want to tell? If so, then let’s hear ‘em. Pretty much every twelve or thirteen-year-old boy has entered the house on Maple Street on a double-dog dare. The number is 1-800-555-2525 and this John David Ford at KGRB 120 on your AM dial with The Devil’s Advocate. I’ll start taking calls after a quick word from our sponsors.”
**