You are here: Products The Heart of Area 51 by Strawberry Chase 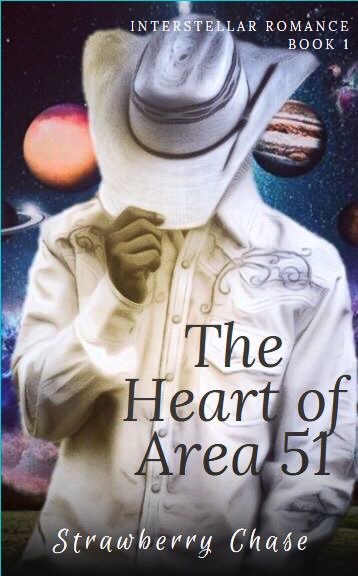 The Heart of Area 51 by Strawberry Chase

In the 1950s, a stranger comes to the rescue of a Nevada waitress on a chilly fall night. She learns the stranger is a rancher who wants to get to know Delilah better. Tom seems to be out of this world, but the police think he has more to do with the death of a local ne’er-do-well. Delilah finds herself covering for Tom and her interest in him growing.

Believing herself to be a spinster, Delilah thinks Tom is everything she has been searching for in a man. Only when the police turn the mysterious dead man case over to the government officials at Area 51, Delilah realizes Tom may have more secrets.

When Tom shows her who he truly is, Delilah has a choice to make. Does she turn him over to the government? Or does she take the chance at a new, exciting life with this rancher?

Strawberry Chase is the child of hippie parents who think naming children is a type of party game. She eats brie, drinks wine, and reads books, not necessarily in that order.

I had a flash of an idea and my hubby helped me come up with a story! It was exciting to research and use some fun conspiracy stories to create it.

She unlocked the rusty metal door to her trailer, quickly closed and locked it, then reclined against it as she exhaled. Most of her life had been so ordinary it bordered on boring. Elementary school at Lincoln Elementary, high school at Alamo High School across town with a part-time job at Jolly’s Pharmacy. Since Mr. Crates didn’t need a full-time employee, after she graduated from high school, she started full-time at the diner.
She’d only ever had one real boyfriend, Allen, whom she began dating in high school, but broke up with a year or so after graduation when he joined the military. He wanted her to wait but didn’t want to marry her, so what good was that? And with World War II over for more than a decade, joining the military seemed more like an escape for Allen than a desire to serve. His actions told her what she needed to know about his intentions, so she broke it off. Last she heard, he was stationed somewhere in one of the Carolinas.
But tonight, well, tonight was like living a whole lifetime in one evening. The fear of the attack, the drama of the man who saved her, (and she still wondered exactly how he did it. Surely, she didn’t really see her attacker fly through the air across the street?) and the heart-throbbing intensity of a tall, dark stranger escorting her home. It felt like a scene from a picture show! So what if he talked funny? He was an educated rancher taking his time with her. The mere idea of it all made her insides quiver.
And that is how she found herself, using the door for support as her knees wanted to give way. Nothing had seemed so real, so alive, so exotic or passionate, as her brief interlude with Tom Quincy. Delilah only hoped she would see him again.