You are here: Products The Hand of Vengeance by Renee Rose 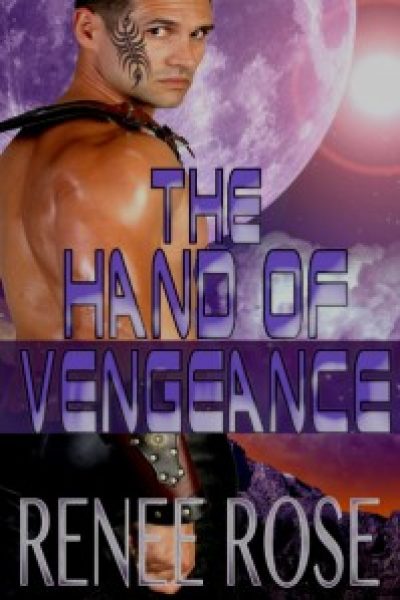 The Hand of Vengeance by Renee Rose

The Hand of Vengeance

On a humanitarian mission to the war-torn planet Jesel, Dr. Lara Simmons is used to dealing with lack of supplies, power outages and the constant earthquakes that afflict the planet. But when she’s captured by the rebels who need her to perform a life-saving surgery, she finds herself in a situation her medical training didn’t prepare her for.

When the airship is blown out of the sky, she ends up in the Jeselian wilderness with no one to rely on but Blade Vengeance, an enormous tattooed rebel warrior. Dominant and unyielding, he doesn’t hesitate to take her in hand when she disobeys the rules he lays out for her. Yet she soon learns he also knows how to deliver pleasure–with a passion she’s never before experienced.

Blade finds the doctor from Earth sexy as hell, especially when she’s giving him attitude, but once he delivers her to headquarters, he tries to pull back from her allure. Known for single-handedly starting the revolution and freeing many of his people, his life is one of hardship, slavery and war. Going soft on a woman isn’t part of his plan, especially with the final strike of the revolution so close. But when he sends Lara back to Earth to keep her safe during the upcoming battle, he inadvertently delivers her into enemy hands. Can he find and save her from the revolution he caused?

I love the Romancing the Stone sort of scenario of the guy who can handle the wilderness trying to protect the stubborn, difficult woman. Setting it on another planet made it possible for him to apply a little discipline to back up his demands for obedience.

“Are you going to keep your arms tucked under you like that, or shall I tie your wrists?”
She hadn’t even realized she’d pulled her forearms underneath her torso, as if to hug herself for comfort.
She licked her lips to moisten them. “I’ll keep them tucked.” Her voice sounded hoarse.
“If you reach back, I’ll double your punishment. It’s for your own safety. Are you sure you don’t need help?”
It was silly, but she took a little satisfaction in the fact that he still cared about her hands even now that the surgery on his people’s president had been completed. “I won’t reach.” She cared about her fingers, too.
Even so, she found herself grasping her own wrists when the first swish of the reed came down to keep her hands from flying back. The cane left a line of fire burning across her buttocks. It hurt. It hurt so badly, it made her want to run from the room. It took a solid three seconds before she could exhale the breath she’d gasped. Blade seemed to be waiting for her to recover, because he didn’t deliver the next stroke until she had.
The next one came down below the first, just as excruciating. She panted into the fine-fibered bedcover, wishing the punishment were over. How many strokes would he give her? Could she take it?
The swish of the reed slicing through the air again reached her ears a split second before the third line of pain erupted across her backside. Her brain began to fog.
He struck her with the crop again. On the fifth stroke, without any conscious thought, she surged up, crawling onto the bed, away from him.
“Back in position.”
She froze in place, the room silent save for the rasping of her breath. He wanted her to willingly place herself back in position. She couldn’t seem to move—she didn’t want to go back there, didn’t want to be whipped any more. She should have opted to be tied up—it would have been easier that way.
Now he was asking her to go back of her own volition, just as she’d stripped and bent over the bed and offered her ass up for his caning of her own accord.
“Please…Blade.”
He didn’t speak, but she felt something from him. Some deep emotion—not anger. Something else. Anguish, perhaps. His breath sounded raspy now, too. When he still didn’t answer, she found herself backing up, putting her feet back on the ground and presenting her welted, quivering cheeks for further punishment.
“Is it too late to ask you to tie me up?”
He didn’t speak, but grasped one wrist, then the other, bending them into the small of her back. He held them caged in his large palm, his touch gentle but firm.