You are here: Products The Guardians of Illusion by Edita 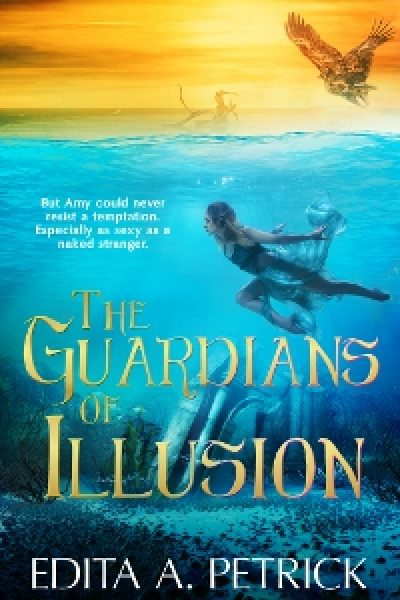 The Guardians of Illusion by Edita

From the swell of the surf arises an incredible adventure thousands of years in the making…
Ambrosia Severn has it all: accolades, success, prestige, and privilege. A renowned surgeon with a sharp mind and the recognition of her peers, she finds herself at the peak of success when a mysterious, dangerous figure enters her life and confronts her with a terrifying ultimatum—give it all up, or die.
Niven is bound by duty and honor. His mission: protect Ambrosia Severn at all costs. Standing between Amy and a violent death at the hands of an unknown assassin, he must seek out her would-be killer and fulfill his ancient oath. Chaos and uncertainty swirl as Niven finds himself tangled between the woman he is sworn to protect and the woman he has sworn to marry.

Edita A. Petrick writes hi-octane, adventure-driven techno-thrillers, paranormal suspense, romantic suspense and fantasy/sci-fi. Her stories blend threatening myths and obscure legends from ancient and modern history, with just a touch of out-of-this-world speculation. It all comes down to, “What if…?”

My Peacetaker series is about ancient myths and legends intruding into modern times and threatening not just our existence, but our very perception of reality. "Guardians" idea came as a result of doing research on ancient landmass, continental drift, undersea volcanic activity and Greek myths with just a pinch of the Atlantis legends.

Suddenly a hand clamped down on her mouth, sending her heart into her throat. She didn’t hear him approach, never mind feel him kneel beside her on the floor.
She felt his hot breath scorch her ear as he whispered, “Not a sound, I said. Nod if you understand and I’ll remove my hand.”
She obeyed, wondering how he could see anything in the pitch black darkness.
He removed his hand, giving her the freedom to expel breath, a little louder than he must have liked since the hand covered her mouth again.
She reached out and when she found his head, she grabbed hold and yanked it down. He seemed to understand such painful means of communication because he let her press her mouth to his ear and whisper, “I wasn’t making sounds.”
In return, his lips found her ear again. This time he had the decency to blow some cool air at it before his hot breath scorched it again with a whisper, “I’m not a brilliant foe and thank you for the compliment.”
She wished he had a shock of hair so she could grab it and yank until it came out in tufts but settled for flicking his ear to get it down to her mouth-level so she could whisper, “What compliment?”
“Liking all my magnificent naked parts.”
She let go of his head and shuffled away from him. She was sure she hadn’t spoken her thoughts out loud. Then again, she could have mumbled….
Suddenly, she felt his hand on her knee, tapping to get her attention. She saw the red flickering beams far down in the sprawling foyer but definitely this side of the front entrance door. He pressed her knee twice. She understood he wanted her to remain down and not move.
He had to have “angel feet”. It’s what her mother used to say to her when she was a little girl and ran to their bedroom at night because she heard footsteps.
“I can hear them, Mommy, I really can.” She used to plead for a permission to crawl in between her parents and spend the rest of the night in their bed.
“Of course you can, darling. What you’re hearing is angel feet. They have such soft footsteps only children can hear them,” her mother would say whereupon her father would grumble that only “good children” could hear them and good children slept in their own beds.
If she tried to make a stronger case for herself, her father’s voice would grow louder. “Ambrosia, get back to your own bed. I’ve got an early call in the morning and I’ve got to make sure I tranquilize June’s Pride, not June.” He was a horse veterinarian and worked for Andrew Styles, the steel and construction magnate at his Longwake Farms, in upstate New York. June’s Pride was a Triple-Crown winner, while June was Andrew Styles’ third wife, renowned for her hysterics whenever she had to spend time on a “smelly farm”, as she called the three hundred acre Longwake Estate.
Suddenly she heard swishing sound as if someone had opened water taps in the kitchen. The red beams grew like a spider’s web, crossing and intersecting in the darkness. Their general direction was the burgundy red leather couch down in the living area. It’s where Niven had planted the “locator” bug. Harsher splats told her something else traveled the path along those red beams and when the lights came on, the couch would be a ten thousand dollar write-off. The villa owners would certainly value it at least that high to the insurance adjuster who’d come to inspect the terminal wounds in the furniture.