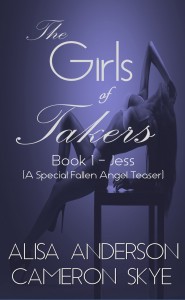 She’s there to give her boyfriend, mob boss Nick Roman, owner of Takers Gentlemen’s Club, a private show he won’t soon forget. An extremely private show…that’s not so private.

She doesn’t care who’s watching. After all that’s part of the fun, isn’t it? Exhibitionism at its most wicked. Being as explicit and naughty as you can be, knowing everyone sees.

Welcome to the Girls of Takers, where women grant wishes every night…If the money’s right.

She believes while life can take you down every path but the right one, eventually everyone will find their happily ever after.

The closer she got to him, the more her chest tightened, breathing quickened. It was hard to believe anyone could make her feel this way. But he did.
“Nick.” She softly touched his arm.
He stood, placing an arm tightly around her waist. Kissing her as he pulled her to him. His cologne smelled masculine. Earthy. It drove her insane. He only wore it when he was with her. She picked it out while they were shopping, almost falling over when he dropped a grand for the bottle. But that was Nick. Only the best for him and his.
“Hey, kid.”
“Hey, yourself.”
“You look beautiful. As usual.”
“Thanks. So do you.”
He laughed softly. “Yeah. That’s me.”
She grabbed his chin, raising it up gently.
“Yeah. It is you.” She traced his lower lip with her finger.
It would always be that way for her.
Nick caught her hand, bringing it to his mouth. Kissing her fingertips. Jess felt a warmth start in her toes and travel up. All he had to do was touch her.
“You know everyone here already, I believe.”
“I do.” Jess nodded her head in greeting. Taking a seat beside Nick in the booth. She ordered two lemon drops before leaning back, content to just listen to the conversation.
“You break things down like a cynic, Johnny C.” Nick grinned, taking a sip of his drink.
“There’s only so much you can do, Nicky.”
“You sound like I can’t protect the business.”
“DeMoretti wants our contacts. He’s been sending threats through messenger.”
“I’m sorry, what the fuck did you just say? And you kept this from me, why, Johnny?”
“I just found out. Came from finding the tracker. We brought this shit to your attention the other day. You know we wouldn’t keep this from you, Nicky. We all know you have a fucking flash point temper.”
Nick leaned over to Jess while Johnny C. was talking.
“That dress if fucking hot. You look fucking hot.”
“I know.”
“Oh, you know, now, huh?” He smiled at her brazenness. “And how is that?”
“You.” Her answer was simple. It’s why she always managed to feel beautiful. Even when she knew she wasn’t beautiful all the time. He made her feel like the sexiest woman in the whole wide world. All the time. Everyday.
“I um…didn’t wear panties. Just for you.” Her lips twitched devilishly.
He groaned low and deep, leaning back. “Brat.” He went to the conversation.
Jess felt him take her hand, slowly moving it to his leg. She glanced up, making eye contact with him. He smiled slightly, before responding to Johnny C.
“Good to know my reputation and temper precedes me.”
Jess scooted closer. Slowly running her hand across his rock hard thigh, closer to his cock. Glancing to see Nick chuckle at what others thought was his amusement at the conversation.
He relaxed, further into the booth. Giving her better access to him. She leaned into him, laying her head against his chest. He draped an arm around her shoulder, letting his hand fall to her breast. She relaxed her arm, letting it fall across his lap.
She slowly unzipped his pants, rubbing her hand against the fabric of his silk boxers. Removing his massive cock from its confines. She savored the feeling of it against her hand. He groaned as she ran her hand to the head. Circling the tip, allowing his pre-come to moisten her hand. His cock was silky smooth. Hard, yet baby soft, at the same time. So thick, she couldn’t wrap her entire hand around him.
Tonight, she came to give him his own personal show. And she was going to make sure he got one. She guaranteed he would enjoy it.
No matter who was there to witness.