You are here: Products The Ghost of Christmas Morning by Vanessa Kittle 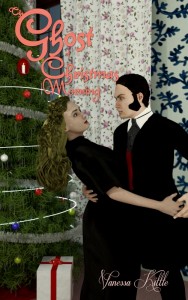 The Ghost of Christmas Morning by Vanessa Kittle

Marie and William become much more intimate as their relationship heats up and they begin to grow closer. Our story continues where we left off on Christmas Eve in part one. Please read part one first! It is also free today, December 12th. The Ghost of Christmas Morning is part romance and part science fiction. A perfect tale for the Yuletide season!

I’m always inspired by the writing of the early 20th century in science fiction and fantasy.

Chapter 1.
Marie stepped back from William’s embrace. It seemed to her that he let go only reluctantly, and she was reluctant to be let go as well. Their first kiss might have felt a little awkward and almost cold, but their second was warm and passionate. Marie had gotten lost in the moment. She felt almost as if she were floating and was swept away enough to wrap her hands around William’s shoulders to feel the soft hair on the back of his neck. It was at that moment that she thought about things a little bit too much. She remembered what William was and how everything about him was impossibly strange. How could his hair feel so real to her touch? How could his lips feel so real? They were soft and warm. How could any of this be possible?
She looked at his dark, lightly curly hair, and very fine and pale features. He was still wearing his beautiful dark gray suit with a deep burgundy vest underneath, and she began to wonder if he had a heartbeat. Did he even breathe? If he was a hologram, how could he be so warm? It even occurred to her that his suit was probably part of his projection. She didn’t know anything about this sort of thing. No one did. And she really didn’t know anything about him. She looked down, avoiding his eyes, which she felt were now watching her closely. She heard him ask, “What is it? Did I do something wrong?”
“No. It was… very nice,” she said. Then she asked, “How did you learn to do that. I mean, have you done it before?” She immediately regretted asking the question. Although, now that she had, she found she was curious to know the answer, so she waited instead of telling him to forget it.
“That was my first kiss,” he replied. “I have watched movies and read many books on the subject, however.”
She smiled at his naive and honest answer and looked up now. He was watching her as she expected, though his expression was very serious, almost grave. She asked, “Did I do something wrong?”
“I don’t believe so,” he said. “Though of course I’m hardly an expert on the subject.” He paused for a moment before asking her, “I feel like something else is bothering you, Marie. If it is something that I have done please tell me. I do not wish to make you feel uncomfortable in any way.”
“I just… forgot for a second that you weren’t a regular person. I’m sorry. That was rude. But I mean…” She broke off, unable to think of what to say.