You are here: Products The General’s Wife: An American Revolutionary Tale by Regina Kammer 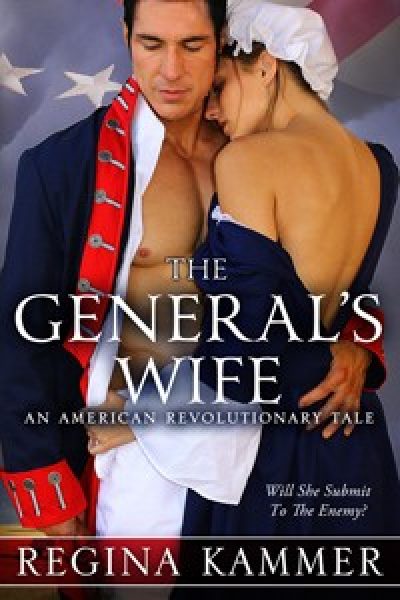 The General’s Wife: An American Revolutionary Tale by Regina Kammer

Lady Clara Hastings is forced to leave her beloved England by her wicked husband, the infamous British general Lord Jeremy Strathmore. They arrive upon the shores of the uncivilized American colonies amidst the outbreak of that young nation’s struggle for independence.

Kidnapped And Held For Ransom

Among Strathmore’s enemies is a man Clara secretly desires. As his captive, she learns of her husband’s debauched pleasures and sadistic past, and discovers her own passions and sensual needs.

A Quest For Freedom

In the clutches of patriot fighters, Clara’s beliefs are challenged, her values are threatened, and she is caught up in a battle for her heart in the arms of a handsome American revolutionary.

The Memoir was written by a girl a little younger than herself, but with a far more vigorous and enterprising spirit. Clara had never read such a story! Fanny Hill’s adventures were of such voluptuousness Clara had to glance around to ensure she was actually alone. Her body heated as Fanny was seduced by a woman, her ire raised when Fanny’s virginity was offered to a man far too old for her, her sex tingled and swelled as Fanny awakened to the pleasures a man could bestow upon a woman.
Clara shifted on the cot trying to relieve the wet tightness between her legs, only managing to arouse herself further. She pulled her cloak around her shoulders and leaned against the cold stone wall, her legs splayed open and crossed. When Fanny opened the parlor door to see a beautiful, sleeping youth, an idea sparked in Clara’s mind that she could touch herself as she read, a thought dismissed quickly. The pleasures of the mind were far more respectable than the sins of the flesh. Better to be caught reading an immoral story than to be caught assuaging one’s lust. Whatever would the captain think if he happened upon her in such a state? Clara smiled. Perhaps he would—
The door to the captain’s quarters crashed open.
She jumped, flattening herself against the wall, her heart pounding so loudly she was sure whoever had just entered could hear it. She peeked through a tear in the annex curtain.
Captain Taylor and Lieutenant Hamilton entered the bedroom with a clandestine air. The lieutenant bolted the door as the captain stripped off his jacket and threw it on the bed, clearly cross and irritable, muttering about that “blasted woman,” as the lieutenant countered with “Sam, Sam,” and soothed him with calming words. Clara could not quite hear what they were saying but she was certain she was the topic of conversation.
Suddenly, the captain pushed the lieutenant against the wall and took him in a violent kiss. Clara froze. Two men kissing? She had never heard of such a thing. The men tore at each other hungrily, stripping off clothes, biting, clawing, licking each other like animals in heat, until, finally, they stood completely naked, and simply pressed themselves together in a tangle of arms, their mouths and tongues still teasing tenderly.

Be the first to review “The General’s Wife: An American Revolutionary Tale by Regina Kammer” Cancel reply