You are here: Products The Freefall Trilogy (Complete Collection) by Sadie Mills @sadiemillsbooks 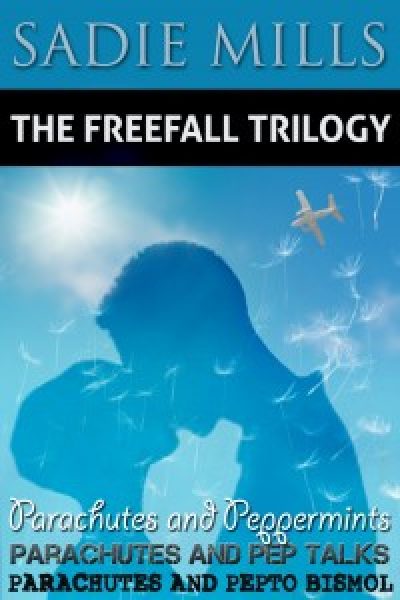 Have you ever knelt at the open door of a plane, gasping in the choke of diesel, the wind stealing the breath from your mouth; knowing that at any second you’ll be falling out of it, plummeting back down to earth, when the stranger strapped to your back pushes you out?

The Freefall Trilogy is a complete box set series of romantic comedy novellas. In these action packed love stories (each between 42 and 52 pages) Sadie Mills grabs the reader by the handholds, drags them to the door and pulls them out of the plane with her, giving a glimpse into a world surging with adrenaline (not to mention insanely hot men) rarely explored in literature.

Chocolatier, Lucy Simkins, has been unceremoniously dumped by her dithering boyfriend, Phil. She needs to blast him out of her system. She needs to feel alive. She decides to go skydiving.

Joshua Snow is one of the most experienced tandem instructors at the dropzone, with a smile that can charm the birds from the trees. Confident, charismatic, even a little cocky, he soon finds himself on the back foot. He finds his shy little tandem student somewhat disarming.

There’s an instant attraction between Joshua and Lucy, an attraction that hasn’t gone unnoticed by his peers. A distracted student is one thing – they’re all used to that. But a distracted instructor? That’s a whole different story.

Lucy is back at the dropzone. She wants to become a fully fledged skydiver and learn to fly on her own. She’s been placed in the more than capable (if somewhat indiscreet) hands of Joshua’s fellow skydiving instructor, Froggy, AKA Jeremy Fisher.

Froggy is a wee, wiry Scotsman who does hopping mad like nobody else, but he has a big heart and he’s got Lucy’s back. Student and instructor build up a bond. Froggy makes a startling revelation regarding Joshua’s past that rocks their relationship to its foundations.

Lucy discovers that in skydiving, life can turn on a dime, and the world can drop away from your feet at any second. A twist of fate leaves not just her relationship with Josh, but Lucy’s life hanging in the balance.

Joshua takes Lucy by surprise, sweeping her off on a romantic weekend to Paris; dancing her over the Seine. But following a chance meeting with one of Joshua’s skydiving friends, Lucy’s dream quickly turns into a nightmare. It suddenly dawns on her that he might have come with an ulterior motive; a motive that terrifies her. BASE jumping.