You are here: Products The Forgotten Bride by Bethany Hauck 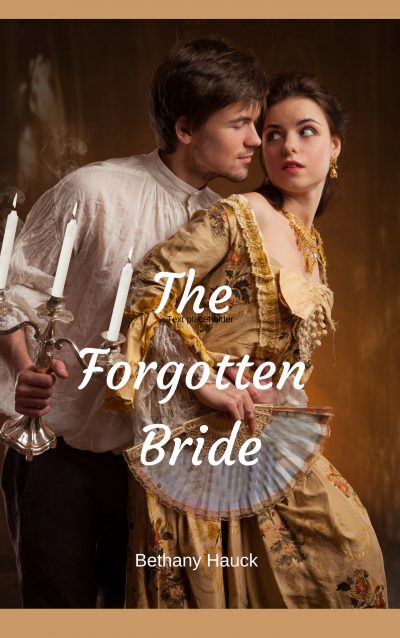 The Forgotten Bride by Bethany Hauck

Jeremy Spencer is just nineteen-years-old, and planning a long-awaited trip to the continent. He’s blindsided when his father informs him that he arranged his marriage years ago, and the wedding will take place in a week. Maybe the news would have gone over better if his bride wasn’t a thirteen-year-old girl.

Anne Jones had a happy childhood until her Papa became ill. Afraid of leaving her alone he contacts his old friend, William Spencer, to see if the betrothal between their children is going to be honored. He needs to know that Anne will be cared for before he dies.

The two will wed and then separate immediately after. They’ll be apart for more than five years. Anne will finish her education, and when Jeremy doesn’t return, make plans to go on with her life. She hopes she never sets eyes on Jeremy Spencer again; she just needs him to sign the annulment papers.

Jeremy is angry when he leaves for his tour of the continent, and vows not to return until the marriage can be annulled. He spends the next five years doing what young men do, because he never expects his marriage to last.

Jeremy finally returns with the intent to end his marriage, but one look at Anne makes him change his mind. He’ll have to work hard to get her to forgive him. Anne is smart, strong-willed, and not afraid to stand up for herself. She refuses to listen to Jeremy’s excuses or apologies, until he turns her over his knee and spanks her, and she agrees to give the marriage a chance.

Can Anne forgive and the two find happiness together?

Follow me on twitter at @Bethanyhauck11
or send me an e-mail at [email protected] and I'll gladly answer any questions you may have, and e-mail you about new releases in 'The McCabe' or 'The Johnson' series.

I now have a facebook page. If you'd like updates on the McCabe or Johnson books or have questions, comments or concerns, you can follow me at https://www.facebook.com/bethanyhauck11/