You are here: Products The Fitzgerald Family Boxed Set by E.B. Walters 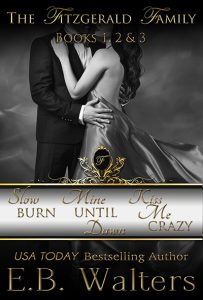 Ednah Walters holds a PHD in Chemistry and is a stay-at-home mother of five. She is also a USA Today Bestselling Author. She writes about flawed heroes and the women who love them. Her Contemporary Romance international bestselling The Fitzgerald Family series, that started with Slow Burn and has a total of six books in this series-to her new USA Today Bestselling series Infinitus Billionaire: Impulse (book 1) published was in January 2015. Indulge (book 2) released in August 4th, 2015 and Intrigue (Book 3) to be released in 2016 She Also writes YA Paranormal Romance as Ednah Walters. Her award-winning, International bestselling Runes Series started with Runes and has a total of 8 books in this series. The latest, Eirik’s Companion series, comprised of three books: Demons, A Runes Companion Novel. Eirik Book1, The story of Raine’s best friend and former crush Eirik Seville, released on December 15th, 2015. Heroes, Eirik Book2 Released on march of 2016, and Gods, Eirik Book3 To be released in June 2016. And her YA Urban Fantasy international bestselling series The Guardian Legacy- , that started with Awakened and has a total of 4 books in this series. The latest Forgotten, released in June 2015 (which focuses on the Nephilim, children of the fallen angels. Whether she’s writing about Valkyries, Norns, and Grimnirs, or Guardians, Demons, and Archangels to her love, family, and friendship play crucial roles in all her books.

Be the first to review “The Fitzgerald Family Boxed Set by E.B. Walters” Cancel reply