You are here: Products The Fire Raven by Alex Owumi 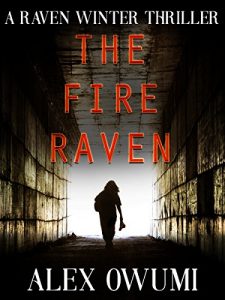 The Fire Raven by Alex Owumi

Raven Winter is known as the world’s most dangerous assassin. She comes from a family of assassins and killing has been her expertise for years. The Recruitment Agency is her main employer and for many years they have sent her on missions all over the world to kill some of the most dangerous people known to man. Not knowing much of her past, she only knows the life the agency has taught her, but as she gets older she wants to know more about events and people from her past.

Alex Owumi was born in Lagos Nigeria, and moved to the United States at the age of eleven. He is the best-selling author of QADDAFI’S POINT GUARD: The incredible story of a professional basketball player trapped in Libya’s civil war which was an international bestseller. He is also a professional basketball player and has played in France, US minor leagues, Macedonia, Libya, Egypt and most recently in England. He currently lives in Atlanta, Georgia.

I wanted to take on the challenge of writing about a woman. The character was molded after the strong women I have come across in my lifetime.

ONE – BLONDE BEAUTY
A solitary woman sits in the corner of a hotel bar, with her mind and its thoughts appearing to reside elsewhere. She looks ravishing in her bright red dress, which seems tailor-made to accentuate her sleek and incredibly fit body. The dress is matched in its radiance by her long flowing blonde hair and fire-truck red lipstick. Her allure is undeniable as not a single person finds himself immune to the gravitational pull which her presence commands. Amidst all of the hushed stares, one particular middle-aged man attentively looks her way with unconcealed desire. Being quite accustomed to such attention, she shoots a furtive glance his way. Their eyes meet and he offers her a smile, which does little to mask his intentions. The woman repays his smile with a smile of her own. Within a second of seeing this the man transports both his drink and himself to the bar stool alongside the mysterious woman, whose name happens to be Raven.
“So what’s your name young lady?”
“Who’s asking?”
He smirks and says, “Obviously someone who is interested.”
“Does this someone have a name?” she replies.
He sips his gin and tonic and conspicuously darts his eyes across her body, clearly liking what he sees.
“Victor is my name.”
She smiles for a second time.
“Well hello Victor. What can I do for you tonight?”
“We can start by going up to my room upstairs.”
This brings a frown to her face, and she cautions him, “I should let you know. I’m not as easy as I look, Mr. Victor.”
“You’re working, aren’t you? I mean why else would you be at a hotel bar alone at this time of night?”
A brief pause ensues and then she starts to laugh.
Starting to look a bit bored, she cautions, “Well let’s just say going upstairs to your room is going to cost you, it’s going to cost you a lot.”
Victor reaches into his suit pants pocket and takes out a not insignificant roll of cash, which she looks at approvingly.
“As you see cost is not an object.”
Without further deliberation, they both get up and exit the bar area, and head to the elevator that goes to Victor’s penthouse suite. The elevator climbs rapidly up the floors of the hotel before stopping at the penthouse, where they both get off. She walks a step behind him as they make their way toward the suite. He turns around and looks at her for a split second, before grabbing her hand to propel her forward. Finally, they get to the suite and with a show of feigned gallantry he opens the door, making way to let her in first. In awe of the view the penthouse offers, she breaks the silence that has fallen upon them.
“Wow, so maybe I was wrong. It does look like you really can afford me.”
He laughs this off and heads over to the suite’s well-stocked mini-bar. He pours out two shots of whiskey, and walks over to hand her a glass. They both empty the contents of the glass and without further delay Victor heads over to the bed. He tries to draw her closer to him in order to kiss her, but she resists, pulling his hands down to his side.
“One second, let me just use the little girls room.”
Slowly she heads to the bathroom and turns its light on, shutting the door behind her. Meanwhile he undresses himself, stripping down to just his underwear. A moment later she walks out of the bathroom in nothing but her bra and panties. He lies down on the bed and watches her as she walks over to its side. Her long blonde hair glides left to right as she moves closer to him. While he is still in a supine position she slowly crawls onto the bed. He spreads his legs and she makes her way towards his mouth. She slowly kisses him from the base of his neck to his mouth, and sticks out her tongue and starts to lick his lips.
His eyes close for a second but they suddenly open in shock as blood starts to spurt from his mouth. She crawls back off the bed and watches Victor writhe in pain as the blood leaks from his mouth. His blood also leaks from the tip of blade that she grasps in her left hand. She slowly walks around to the other side of the heart-shaped bed. Both of Victor’s hands are around his own neck as he desperately struggles to breathe. He makes a desperate effort to grab her but doesn’t have the strength to do so. She watches as he is bleeding to death.
“I’m just trying to make you feel the same pain you made your victims feel,” she explains as she takes the blade and shoves it into the left side of Victor’s neck, putting him out of his misery. He dies instantly and his blood quickly fills the bed’s previously white linens. She leaves the blade in his neck while she carefully puts her red dress back on before walking out of the suite for good. She takes the elevator back down to the hotel bar and then disappears through the lobby and into the night.