You are here: Products The Fifty-Two Week Chronicles by Joslyn Westbrook 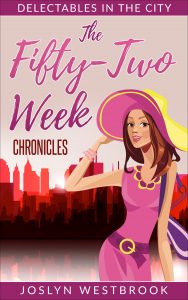 WHAT HAS THE POWER TO CONQUER HATE: LOVE OR FOOD? OR PERHAPS A LOVE FOR FOOD?

When Penelope Monroe loses her dream job as a food critic, she launches a weekly Food Blog – The Fifty Two Week Chronicles – promising to post restaurant reviews to keep fans entertained. Her best friend begs her to work as a restaurant consultant for a client hired by his PR Firm, and Penelope agrees, unaware of who the client is.

Jonathan Knight is still steaming from the poor review received from a renowned food critic that destroyed the image and reputation of his 5 star-rated restaurant. He seeks help from a restaurant consultant, not knowing the feisty (and extremely attractive) woman hired to help rebuild his reputation is the same woman who destroyed it.

Penelope and Jonathan quickly develop a spicy connection that is sure to take them on a very heated culinary dash toward success and a chance at love. But will Penelope be able to keep her true identity hidden from Jonathan?

Joslyn Westbrook has been creating stories since grade school. Her passion for writing often led to teachers and college professors reading her stories to the class, showcasing her creativity. Putting her writing on hold, Joslyn pursued a career as a Business Consultant as she raised her two children. While she enjoyed working with business owners, she craved what she believed was her true calling – writing. During her free time, Joslyn began writing her romance novel and series of chick-lit style novellas to curb her passion for writing. Her work as a Business Consultant has spawned the concept of several characters featured in her books. Joslyn is a self-proclaimed foodie, enjoys shopping, cooking, binge watching on Netflix, and spending time with her husband and children at home in sunny California.