You are here: Products The Falling of Love by Marisa Oldham 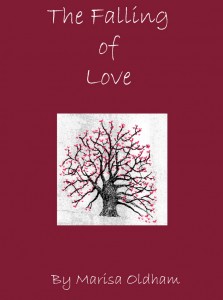 The Falling of Love by Marisa Oldham

Grace Hathaway is no stranger to tragedy. At the age of ten Grace tragically lost both her parents in a boating accident, leaving her older brother James to take over the task of raising his two younger sisters. Grace tries to lead the life of a normal teenager, but assumes some of the responsibility of caring for her younger sister Michelle and taking care of her parent’s home. Grace is a talented aspiring artist mature beyond her years. Her world is turned upside down the day that Ian Taylor, misfit-rocker-rebel, clanks his way into her mathematics class. At first sight, Grace is taken by Ian’s alluring nature. The two fall deeply in love with each other quickly. After learning of Ian’s troubled family life James allows Ian to move into the Hathaway home. A dramatic turn of events sends Ian and Grace on the road to Los Angeles, CA where Ian pursues his dream of becoming a rock star. New challenges present themselves to Grace as Ian dives head first into the lifestyle of an LA rocker. Forced to grow up all too quickly, Grace is now faced with heart wrenching circumstances that change her life forever.

The Falling of Love is the first novel in a series of novels that will follow Grace Hathaway’s life and personal struggles. Everyone has a beginning to their story and an end…

This is the beginning of Grace’s story.

Marisa is also entertaining the idea of writing a historical romance based on a photo-shoot she did in 2012 and since she loves to read thrillers, she plans to try to see where she can go with tackling writing a thriller.

I read a really bad erotica series and thought I could perhaps do better. I quickly learned that writing erotica is not as easy as it may seem. Since writing my first novel, my readers inspire me to keep writing.

“Sing to me.” she says softly.
Without hesitation or even a hint of nervousness, Ian begins to sing to her. A song she has never heard before. She immediately gets chills all over her entire body; to her pinky toes. His voice is echoing off the canyon and filling the night air with a beautiful melody. At this moment, Grace knows she really, really likes this boy. He looks at her as he sings the last verse of the song. He just stares at her; she is smiling at him with her eyes.
“Ian, I, I’m speechless,” she shakes her head, “Your voice is like an angel.”
He flips his long auburn hair over his shoulder then wraps his arms around his knees and rests his chin on them. Grace is swooning over him and he finds it amusing.
“I’ve never heard that song before.” she says as she looks at him adoringly.
“Well I hope not! I wrote it.” he says with a chuckle.
In this moment, he just became even more amazing to her. Not only does he have one of the most beautiful male voices she has ever heard, but also the lyrics to the song were heartfelt and beautiful. Ian Taylor was not a boy who should be judged by his cover. He was so much deeper than the long hair, leather jacket, jewelry, and ripped pants he wore. There was so much more to this boy that the other kids at school had no idea of; nor would they even care about.
“Gracie.” he says interrupting her thoughts.
“Yes, Ian?” she says in a husky voice.
“It’s ten o’clock. I better be getting you home.”