You are here: Products The Fall of the House of James by Annette Austin 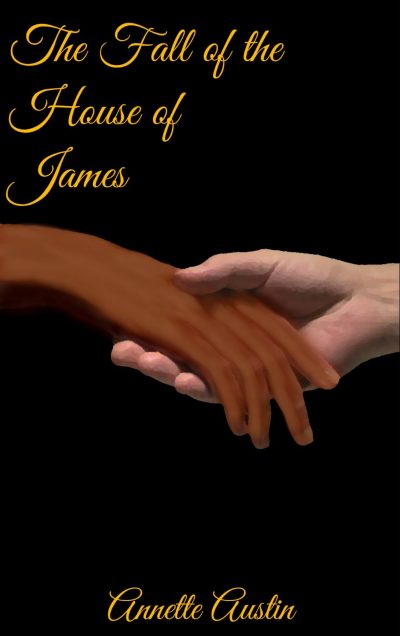 The Fall of the House of James by Annette Austin

THE FIRST BOOK IN THE JAMES SAGA
Falling in love with a slave – can it ever work?

A turbulent tale of love entwined with the brutal nature of slavery, the first book in The James Saga follows the forbidden romance between Lawrence James, the son of a plantation owner and Jasmine Thomas, a slave on the Havers End plantation in 1860.

Although he’s aware of the consequences, Lawrence cannot hold back as his feelings continue to grow the more time he spends with Jasmine.

However, there are other problems facing Lawrence. He has been groomed to take over the plantation, but Lawrence has a deep uneasiness about becoming a slave owner. His volatile relationship with his father, Edward, doesn’t help matters.
There are also concerns over his eldest sister, Belvedere Rossiter, and her growing friendship with a rebellious slave, Donald Archer. While Lawrence hates Donald, Belvedere has an opposing view.

Lawrence’s biggest dilemma is – does he choose to be the dutiful son or risk everything to be with Jasmine?

Annette Austin is a self-published author of five novels in the acclaimed The James Saga series, ‘The Fall of the House of James’, ‘Always A Slave, ‘A Slave’s Vow’, ‘Betrayal of Love’ and ‘Between Love and War.’ Her first novel spent some time at the Number 1 spot on Amazon (History of Antebellum U.S. Chart.) All five of the books in The James Saga have garnered five-star reviews on Amazon.

Before she embarked on a writing career, Annette predominantly had a career in finance. Whilst she achieved some success, her ambition was to become a full-time author. After she had a startling dream in December 2012, it gave her the impetus to start writing her first novel, ‘The Fall of the House of James.’ Following a long personal struggle, the book was finally released in June 2018. Since then, she has published four more books in The James Saga. Annette is hoping to publish several more in the series. Recently, she has published her fifth novel, ‘Between Love and War’, which is available on Amazon. She will begin work on two more novels shortly. Annette has always been fascinated by history including the more brutal and controversial aspects which many people are unwilling to discuss, hence this was a factor in setting the novels during the time of slavery.

Away from writing, Annette loves to read, exercise, especially yoga, sings loudly to 1980’s pop music and is a sports enthusiast (watching, not taking part.)

I am passionate about writing and I've been a self-published author for the last three years. I've always taken an interest in history and wanted to find out more about slavery, which eventually lead me to write the first book in The James Saga, The Fall of the House of James. I've written four more books in the series, Always A Slave, A Slave's Vow, Betrayal of Love and Between Love and War and I hope to write more novels in the series soon.