You are here: Products The Fall of Lady Westwood by Trent Evans 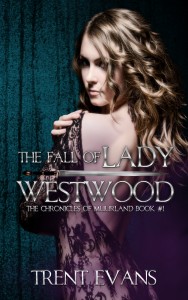 The Fall of Lady Westwood by Trent Evans

Decades of prosperity have left the realms of man happy, healthy … and complacent. Bounty, fertility, and a bright future lay ahead for all, or so it would seem. For during these happy times, the enemies of men have planned, and gathered — and waited. All across the land, hubris, arrogance, and decadence have left the world of man vulnerable, weak, ripe for the taking.

For decades the nocturne have bided their time, bolstered their numbers, and sown the seeds of man’s downfall. Now the time has come to crush the armies of men, for wiping human civilization from the earth — and for the rise of the vampires.

Caught in a terrifying series of events, a humble landowning family, torn asunder by the whims of a jaded, cruel noblewoman, seeks to be reunited. Young Owen, deprived of his Sophie, finds himself thrust into a mission his youth has left him ill-suited to carry out. And Sophie’s father, vowing to do anything to retrieve his daughter, prepares to sell his soul for her freedom.

Evil has come to the realms of men ― and only the power of love has the chance to save it.