You are here: Products The Fall Book 1 Conversion by ST Campitelli 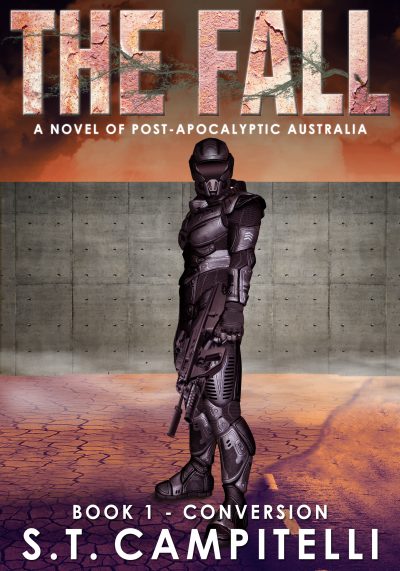 A wave of infection, the Jackson Virus, has swept the world, leaving in its wake a terrifying apocalyptic wasteland populated by wild cleanskin survivor groups and the ravenous, infected night predators – the jacks. In this nightmare landscape, one of the last remaining sanctuaries is Kulin Wallcom, a community enclosed by a 10-metre wall patrolled by what’s left of the military. The wallcoms are the last remaining bastions of defence and security in a world gone over the edge.

But the people of Kulin can’t stay behind their wall forever.

Recovery expert, John Bradley, is part of a major operation into the wasteland looking to not only ensure the survival of Kulin by bringing back critical supplies from the abandoned Southstone Supermall, but, more crucially, to also locate and extract the only person left who may be able to reverse the tide of infection.

However, the mission faces danger at every turn. It seems to be compromised from the inside, Southstone is thought to be an impossible target overrun with infected, and wasteland survivor bands, led by the psychopathic wasteland leader, the Headhunter, are bent on making sure the operation has to fight each step of the way to get back to the wallcom before nightfall.

Because that’s when the jacks come out.

And they will find you.

Welcome to the world of The Fall.

S.T. Campitelli is a first-time author, The Fall his first book. He hasn’t won any awards and he isn’t a best-selling author… yet.

He is an educationalist by profession and has continuing addictions to both movies and reading with a clear bent towards the post-apocalyptic, Scandinavian crime, and historical fiction and non-fiction.

He lives in Melbourne, Australia, with his family, and he is neither waiting nor prepared for the impending Apocalypse.

In terms of inspiration or influences, I have long been into post-apocalyptic fiction as a genre both in books and perhaps more so in movies. Three huge influences on me growing up in 70s Australia were, firstly, Planet of the Apes; I was absolutely fascinated by the notion of a future, post-apocalyptic ape-run world with Charlton Heston’s lead character a ‘last (sentient) man alive’ figure, which in many ways parallels his other great role (for me) in The Omega Man, my second great influence. Though it dates now, this movie was compelling with Neville the seeming last man standing character in a world gone to pot. My third and perhaps most seminal influence was the Australian Miller-Kennedy classic Mad Max 2 – The Road Warrior. In many ways, this to me is almost the perfect movie. I love the simple plot, the hero-out-of-the-wasteland Max, the Lord Humungus’ and his terrifying crew, the badass vehicles, the outback setting, the desperate surrounded compound; it’s perfect – and the last 30 minutes are just compelling. I take one movie to a desert island – this is it.
I’m perhaps fascinated by themes of isolation within threatening environments and abandonment and it is these themes I try to highlight in this book.

It was late. Dammit. They shouldn’t still be out. This time of year it got dark between 5 and 6 o’clock. Dusk, that’s when the infected started coming out of torpor. And you did not want to be outside the compound when that occurred. No thank you, sir.

But, he’d got a bit caught up in this Recon and Recovery detail on a search for meds. To do that he’d needed to get to a chemist or a supermarket that wasn’t wrecked, ransacked, gutted, torched, or worse, inhabited by infected. He’d found a pharmacy that fit the bill, thank god, and had even snagged six maxi-packs of Panamax (try saying that six times fast). They were the old-fashioned tablet form, but they’d do. He’d also found a nice 50-pack box of unspoiled protein-shake sachets, two medipens and five plasti-cans of Coag-spray in an office out the back – that was a good pick. He was now on his way back to the rendezvous area to hook up with Matt to make the quick haul back to Kulin Wallcom before dark.

Now, speaking of which, where was he? Matt Johansson, his R&R partner, liked to split up and go out alone to double the chances of recovering useful stuff. It wasn’t in the regs, they were meant to stay together. After all, that was the idea of going out in pairs. Still, they’d been doing R&R, a while now and John couldn’t argue with how good Matty was at salvaging stuff by himself. Clothes, fuel, electronics, bits of iron, aluminium or steel he gave to Metal. Last time John had tried bringing back some scrap the guys in Metal said, ‘Yeh, this is good scrap, minus the ‘s’.’ So, he just stuck to things he understood, meds, food, books – as in print ones, ‘real books’ his father used to call them. He loved to read, so yes, that last one was a bit selfish. John also knew how to find infected. Seemed to have a sixth sense about them.

John scoped the area for his partner, listening for the tell-tale sounds of coordinated foraging. Problem was that Matt dampened his 360 comms out here to concentrate. ‘Throw me a message, why don’t you?’ he says. ‘You don’t even have to type, just think ‘n’ throw.’ Yes, of course, Matthew. Apart from the throw function being only effective to a range of twenty-five or so meters, you had to have a visual on the receiver, and he bloody well didn’t know where his peripatetic partner was. He was probably imagining it, but he swore his microchip implants tingled whenever he thought about throwing a text. He scratched at the little bump at the back of his neck.

He was reluctant to call out his partner’s name. Some of the stronger infected were active at semi-dusk, willing to bet their quick reflexes against their pre-dark weakened vision for the chance of a feed. God, ‘a feed’. He didn’t think he’d ever get used to the idea of people, even brain-fried ex-people, eating other people alive. Animals yes, he got how the infected ate them, but people? But that was the world he now found himself in.

And the infected weren’t the only problem out here. Just ahead he spotted a blood trail leading from the road he was walking on. John stopped to have a closer look. There was a mess of smudged paw prints in the blood. He stiffened – dogs.

He shouldered his Austeyr F92 rifle and scoped the area. There was nothing in the vicinity, nothing he could see or smell anyway. He bent down and examined the blood. It glistened, fresh, a daylight kill. Which meant it was a ‘clean’ pack. As known animal Jackson Virus carriers, any sort of dogs were a threat, the non-infected ferals just as much as their JV counterparts. And they were damn aggressive.

He inhaled through clenched teeth. ‘Alright, Bradley, let’s see where this goes.’