You are here: Products The Echoes of Love by Hannah Fielding 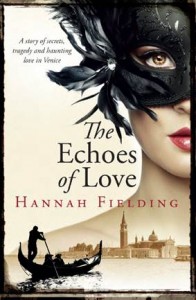 The Echoes of Love by Hannah Fielding

Seduction, passion and the chance for new love.  A terrible truth that will change two lives forever…

Venetia Aston-Montagu has escaped to Italy’s most captivating city to work in her godmother’s architectural practice, putting a lost love behind her. For the past ten years she has built a fortress around her heart, only to find the walls tumbling down one night of the carnival when she is rescued from masked assailants by an enigmatic stranger, Paolo Barone.

Drawn to the powerfully seductive Paolo, despite warnings of his Don Juan reputation and rumours that he keeps a mistress, Venetia can’t help being caught up in the smouldering passion that ignites between them.

When she finds herself assigned to a project at his magnificent home deep in the Tuscan countryside, Venetia must not only contend with a beautiful young rival, but also come face to face with the dark shadows of Paolo’s past that threaten to come between them.

Can Venetia trust that love will triumph, even over her own demons? Or will Paolo’s carefully guarded, devastating secret tear them apart forever?

My first novel, Burning Embers, is a vivid, evocative love story set against the backdrop of tempestuous and wild Kenya of the 1970s, reviewed by one newspaper as ‘romance like Hollywood used to make’. My new novel, The Echoes of Love, is a story of passion, betrayal and intrigue set in the romantic and mysterious city of Venice and the beautiful landscape of Tuscany.

Venice so captured my imagination that I knew some day I would write a romance novel set in this most elegant and fascinating of cities. But it had to be the right story to fit the place. For me, that meant a story that reflected the two faces of Venice – the mask she wears, and the true form beneath.