You are here: Products The Duke’s Dangerous Darling by LL Neal 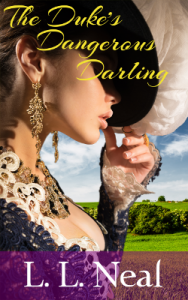 There is humor in all things….