You are here: Products The Dream Jumper’s Promise by Kim Hornsby 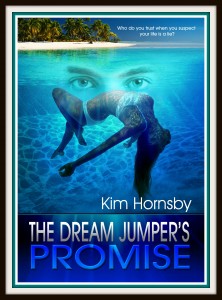 Without a recovered body Tina Greene can’t accept the surfing death of her husband, Hank. She pulls herself from the emotional wreckage months after signing the death certificate and trades mourning for saving her Maui dive shop from bankruptcy. When Jamey Dunn walks back into her life things take a strange turn. Dreams of Hank have the dive instructor questioning her sanity and leaning heavily on Hank’s best friend, Noble. Jamey and Noble clash at every turn, both desperate to help Tina. When Jamey discovers the dreams hold clues to Hank’s disappearance he reveals his strange ability to enter dreams. Trusting the man who betrayed her years before, doesn’t come easily for Tina when the decision to let Jamey enter her subconscious has a price. As Tina, Noble and Jamey decipher the mystery of Hank’s disappearance, danger sets in to reveal that one person is flirting with insanity, one is a traitor, and one is an imposter.

I was born in Belleville, Canada, lived in Vancouver, Maui, Whistler, Taipei and now Seattle. Travel is at the heart of who I am and my favorite place to go right now is Nicaragua, where the next Dream Jumper book is set.

I set out to write a suspense novel with a twist at the end that would surprise the reader. Having lived on Maui for ten years in the eighties, I chose to set the location in the islands and bring the reader to the exoticism of Maui. I was a scuba instructor when I lived in Lahaina so I know that lifestyle and wanted to use it in the book because most women will never know what it feels like to be a scuba instructor on Maui. Or know someone who can visit dreams!