You are here: Products The Doctor’s Secret Bride by Ana E Ross 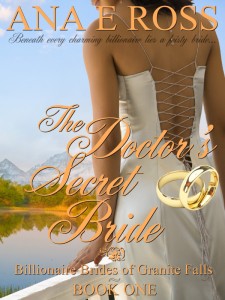 Michelle Carter has been down on her luck since the day she was born. So it comes as no surprise when through a series of unfortunate events, she finds herself jobless, penniless, and practically homeless. In a desperate attempt to get back on her feet, Michelle accepts a job as a nanny, and finds it absolutely impossible to resist the sexual magnetism of her handsome, sexy billionaire boss–but resist she must for as long as she could, especially since she’s keeping secrets from him.

Believing that his late wife betrayed him with another man, falling in love again is the last thing Dr. Erik LaCrosse wants to do. But fall, he does, and so hard, he secretly marries the alluring nanny from the wrong side of the tracks. However, when he unearths a disturbing secret from Michelle’s past, Erik must choose between his loyalty to a dead woman and the love burning in his heart for one who is very much alive.

If you like Harlequin Presents romances about alpha males and feisty heroines who challenge them down to their silky briefs, you will love Ana’s stories.

I was inspired to write this story while passing by a cemetery and observing a young handsome man standing at a gravesite holding the hand of a five-year-old little girl. I wondered if it was his wife and what his life with her had been like. I wanted to tell his past story and follow him into the future as he struggled to put his life back together again. The character of Precious, his daughter, was inspired by my then five-year-old daughter.

Chapter One:
Erik frowned as a young woman hopped out of the cab that had just pulled into his driveway. His frown deepened when she hauled a suitcase out behind her, raised her hand to shade her eyes against the noonday sun, and gazed speculatively up at his house.
“They have got to be kidding me,” he muttered. He’d distinctly requested an older woman—no younger than fifty, who had experience taking care of young children.
Someone from the agency had called to say that the scheduled candidate had canceled due to a family emergency, and that a Michelle Carter would be coming instead. Was it okay if she brought her credentials with her.
Although the agencies conducted investigations, Erik ran his own background checks before interviewing potential employees. He could never be too careful when it came to the welfare of his only child. Today, he’d trusted Ready Nanny Agency because there was no time to check, and look what they sent him—a girl barely out of her teens.
Her hair was cut too short for a woman. She was too skinny and too tall. Her jeans were fitted too tightly, and the seductive sway of her narrow hips was unequivocally too provocative. Despite his objections, and the fact that he handled women’s naked bodies on a daily basis, Erik felt a poignant stir in his loins.
After ten years as a gynecologist, he’d learned to channel his sexual energy elsewhere when he walked into an examination room to see a patient. It was all professional. The woman walking up his driveway wasn’t his patient, and the images running through his head were anything but professional. They involved tangled sheets, soft sighs, harsh moans, musky odor rising from damp smooth skin…
Shaking the libidinous thoughts from his head, Erik tightened his jaws and moved away from the window. He’d been without a woman for too long. Yes, that was definitely his problem. It had been two years since his wife’s death, and since that fateful night, he hadn’t looked at any woman twice, much less bedded one.
At the chime of the doorbell, Erik stepped into the hallway and caught up with his housekeeper. “Mrs. Hayes, tell the young lady that I was called to the hospital, and—um—that I will contact the agency with a new date for an interview.”
“Yes, Doctor.” Mrs. Hayes threw him a speculative stare at the blatant lie.
Erik marched down the hall to his study. He closed the door, dropped into the chair behind his desk, and stared at the painting of his wife hanging above the fireplace.
As usual, he tried to shift his sexual interest in other women to memories of lovemaking with her, but as hard as he tried, there was no shifting for him today. As he stared into his wife’s brown eyes, the only images Erik saw were those of the young girl sashaying up his driveway.
“Come in,” he responded to the knock on the door. “Is she gone?” he asked when it opened behind him.
“No. She isn’t gone. She’s still here.”
Erik swiveled around at the sultry voice. His heart did a triple take, and lust like he’d never experienced crawled through his belly and settled into his groin. At a loss for words, he took a hard, close-up look at the one hundred and forty pounds of temptation heading his way.