You are here: Products The Discipline of Amanda by Victoria Winters 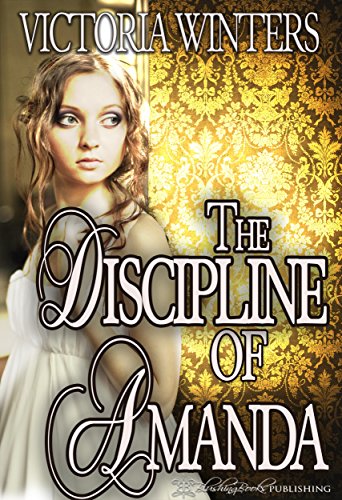 The Discipline of Amanda by Victoria Winters

How did a wealthy New York debutante end up in a nursery, in a castle, being treated like a child? Amanda Vanderpoint is a very wealthy girl, but unwelcome in New York high society. To improve her family’s social standing, she is taken to Victorian England to marry into British nobility.

While her wedding to the Duke of Chaucer was wonderful and the envy of young girls everywhere, married life is not at all what Amanda expected. Her husband is intent on regressing her to the status of a British schoolgirl until she learns to be a proper duchess.

Under her nanny’s tutelage, Amanda is subjected to the inevitable punishments and lessons, all designed to teach her humility and rid her of her American ways. There she stays, learning how to fit into British society and how to please her commanding new husband. Can she endure the humiliating treatment until she is ready to take her place at her husband’s side as the Duchess of Chaucer?

Publisher’s Note: This book contains elements of age-play, the discipline of an adult woman, and explicit scenes. If any of this offends you, please do not purchase.

Victoria Winters lives near her three daughters and two granddaughters in a place of unparalleled desert beauty and serenity. Although she was born and raised in America, she is drawn to all that is British. She is a diehard Anglophile, monarchist, and frequently takes trips to explore the English countryside. Back home in America, she worships at an Anglican church.
As a child, she went to a Catholic school which was where, as a naughty little thing, she frequently ran afoul of the good nuns. There she experienced her first taste of corporal punishment. To this day, the sight of a nun holding a ruler fills her with morbid fascination and not a small amount of dread.
When not putting pen to paper, she serves as a Past Life Regressionist, Tarot Card Reader, and Seeker of Spiritual Truth in an eternal quest to merge the past with the future. She frequently converses with spirits who, she is happy to assure one and all, mean us no harm. When writing, she strives to stay out of her characters’ way and let them tell their stories through her.
Victoria believes that reality is highly overrated. By reading her books you will enter a world where swashbuckling pirates, mad scientists, time travelers, bionic nannies, commanding cowboys, handsome knights, dashing lords, and naughty maidens are very much alive and seeking adventure.

Unconventional Marriages:
Pleasing Him
An Unacceptable Arrangement
Pleasing Her

Amanda Vanderpoint, former New York City debutante and now the Duchess of Chaucer, sat at the writing table in her summer palace in the south of England. By all appearances, it would seem that, as an American, she had done quite well for herself. By marrying the Duke of Chaucer, she had become a high-ranking member of British nobility.

On this particular day, Amanda, the envy of young girls everywhere, was writing— not the sort of correspondence one would expect from the Duchess of Chaucer. Instead, a casual observer would be surprised to see the beautiful young woman dressed as a little girl and seated at a small school desk. On closer inspection, one would be even more surprised to see her writing, “I will not disobey my papa,” over and over again in her daintiest hand.

“How many sentences?” a female voice with a Scottish accent asked. Amanda bit her lip in a futile attempt to keep her tears from falling. She knew her governess, Nanny Ferguson, would not be pleased with her answer.

“A h-hundred and thirty-three, ma’am,” she replied, pushing the paper forward so her falling tears would not wrinkle the page. The last thing she wanted was to be forced to start over because her nanny found an imperfection in her paper. Nanny Ferguson was a large, solid woman who wore her hair pulled back in a severe grey bun. She snatched Amanda’s paper off of the desk and studied it.

“This is unacceptable, Amanda. See, there is a smudge in the tenth sentence. You are a disobedient little girl and your papa will not be at all pleased when he gets his evening report of your behavior. Instead of three hundred sentences, I want you to write five hundred, this very afternoon. You will begin again.”

The tenth sentence? Amanda’s temper flared as she literally saw red. Her nasty nanny had looked at the paper a dozen times and let Amanda keep going when she must have known all along that she wasn’t going to accept it? Amanda’s lips tightened into a thin line. She was weary and feeling petulant. It was past time for the afternoon nap she had become accustomed to. Writing “I will not disobey my papa” five hundred more times seemed an impossible task.

“I won’t. I won’t, and you can’t make me,” Amanda cried, rising to her feet to confront her nanny. This caused the delicate chair she had been perched upon to fall, its back making contact with the priceless rug underneath.

Nanny Ferguson raised one eyebrow and looked with disapproval at the small blonde woman standing before her who, by all rights, should have been the lady of the house but was kept as a small child by her husband.

“My, we are feisty today, are we not?” Nanny Ferguson asked, tapping her palm with the pointer she always carried. Looking from the slender rod to her nanny’s face, Amanda’s eyes widened in dismay.

“As you well know, little miss, this outburst is unacceptable. You will pick up that chair and carry it to the center of the room.”

Amanda was little in every sense of the word. She was barely five-feet-tall and had a dainty, albeit curvaceous figure. Her big blue eyes welled with tears as she watched her nanny reach one beefy hand up towards the bell pull.

“I’m going, I’m going,” Amanda cried, picking up the chair and rushing to the center of the room but, alas, she was not fast enough. She was appalled to see her nanny give the bell pull a good hard yank. Instantly, a footman appeared.

“How may I be of service, ma’am?” he asked Nanny Ferguson. He did not bother to address the small woman dressed like a little girl standing beside her. The staff had been instructed not to take orders from the duke’s new wife.

“Please tell his lordship that his presence is required in the nursery.”

Amanda began to wring her hands. To have her husband make an appearance in the nursery was a most unfavorable circumstance. The same man who could drive her to heights of unimaginable ecstasy in bed at night was also a harsh taskmaster who expected perfection from his little wife.

Amanda waited, her knees shaking, as her displeased nanny glared at her. She desperately prayed for the floor to open up and swallow her whole. What would her friends and family say if they could see her now? Everyone had been so envious when she had married the Duke of Chaucer. Young girls on both sides of the Atlantic had followed the story and wedding photos printed in both the New York and London papers. Once the envy of all, what would they think if they could see her now? Dressed in a little girl’s dress with a large bow perched on the back of her head above hair which had been coaxed into long honey-blond ringlets, she knew she looked like an eight-year-old. She recalled visiting a fortune teller’s booth at a fair when she was just that age. The woman had looked at her palm and told her that she could become anything she wanted if she were willing to pay the price. Was this the price of being a duchess— being kept by her husband as a little girl? If so, was she willing to pay it?

“What is this?” her husband asked, standing in the doorway. Amanda lowered her head in shame but could not resist peeking up through her eyelashes at her handsome, commanding husband. He was tall and distinguished with dark brown hair that swept back off his brow. He had straight dark eyebrows above a square, handsome face and cut quite a dashing figure in his country tweeds. Nanny Ferguson bobbed into a curtsey and then informed her master of his little wife’s sins. Lord Chaucer listened as if he couldn’t quite believe what he was hearing. He raised one eyebrow and looked down with disapproval at his small bride.

“Amanda,” he said, sounding for all the world like a disapproving father. “What is this Nanny Ferguson is telling me? You are refusing to behave and you have not finished writing your sentences? She tells me that you raised your voice to her and knocked over the chair you were sitting in.” Before she could respond, Nanny Ferguson handed the paper Amanda has spent the better part of the day slaving over to her husband. He glanced at it with a frown and then shook the offensive paper under her nose. “Are you satisfied with your efforts? You were given one task to perform today. It has taken you half the day to turn out a substandard paper and now you must begin again. But do not despair, my dear, you will sit here all day, if that is how long it takes.”

“Geoffrey— Papa— I mean,” Amanda replied, finally finding her voice. She knew there was no point in calling her husband anything but papa or sir; he would not respond, otherwise. “Please, Papa, please. I am not a child. I am a woman and your wife. I insist that you put an end to this nonsense and let me take my place at your side as the lady of the house. This is ridiculous,” Amanda said, her anger surging again. But she grew quiet when her husband put out his hand and Nanny Ferguson placed the pointer in it. Her husband stared blankly at her as if she had spoken a foreign language he was not familiar with.

“Nanny Ferguson, you will prepare little Amanda for a bare-bottomed rendezvous with this,” he said, grimly swishing the pointer through the air until it whistled. “I myself shall wield the instrument of her correction.”