You are here: Products The Disciplinarian: A Collection of Short Spanking Stories by Natasha Knight and Casey McKay 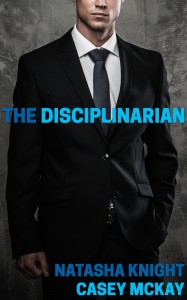 The Disciplinarian: A Collection of Short Spanking Stories by Natasha Knight and Casey McKay

The role of a disciplinarian can come in many different forms in a woman’s life. These stories are about six different women who find themselves taken in hand, and taken over the knee.

“Guilty As Charged”: Julie has the hots for her cop neighbor, Brad, who is also a professional disciplinarian. When he catches her driving recklessly, he decides she might need more in her life than one spanking a week.

“Consequences”: Every action has a consequence, and in twenty year-old Andrea’s case, when she’s caught breaking hotel rules, she is given a choice: pack up your things and leave immediately or submit to corporal punishment. But what Andrea never expected to learn out of this was that discipline, administered with love, can form a powerful bond.

“Paying Rent”: When Amber gets kicked out of college and ends up on Tony’s doorstep, she doesn’t anticipate Tony taking an interest in her life, or holding her accountable for her actions; including paying her rent on time. When he threatens to spank her, she decides to push back, but how far is too far?

“The Penitent”: Marcus Corran is not a man to tolerate liars or thieves, so when he catches young Marlene, an employee in his bookstore, doing both, he decides the best way to deal with her actions is a good old fashioned, bare bottomed, over the knee spanking.

“The Agreement”: Lindsay and Nick have been dating for two years and they have an agreement. So when Lindsay deliberately lies, Nick decides to use a more creative form of punishment.

All stories are M/f except for “Consequences” which is a F/f spanking story. The stories depict situations between consenting adults who believe in a good, old fashioned spanking to get to the bottom of a problem. If such material offends you, please do not purchase.

Be the first to review “The Disciplinarian: A Collection of Short Spanking Stories by Natasha Knight and Casey McKay” Cancel reply