You are here: Products The Disappearance of Isobel Craig. Book One: The Farmer’s Boy by Robert Hall 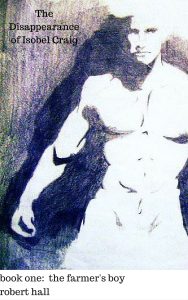 The Disappearance of Isobel Craig. Book One: The Farmer’s Boy by Robert Hall

Chapter 1
Getting Away From it All
You can’t turn back time – and right at this moment, with Duff McDaid working his way down my cock, I don’t want to – but still, sometimes, you have to ask yourself how the hell did this happen?
Ten minutes ago I was standing with the water of the mountain pool lapping around my hips, my prick shrunk to the size of a walnut by the cold, the heat of the sun burning my shoulders, the smell of heather and peat filling my nostrils and the sound of the waterfall filling my ears. Absolute isolation; bliss, perfect bliss. I left the roar of London less than forty eight hours ago and now this; silence, solitude and a landscape devoid of humanity. There’s nothing up here but hundreds of miles of emptiness, curlews, lapwings, grouse, deer, heather, hot sun and cold, clear water. Nothing. There’s always, of course, the danger of a stray farmer or ghillie but I’ve walked an hour from Auchtintilloch to get here and I’ve seen nobody, not a soul, utter bliss.
That was ten minutes ago. Humanity didn’t take too long to catch up with me. The roar of a quad bike was the first and last warning it gave and then there he was, there we were. I’m six foot tall, slim, wiry, well muscled; a city-boy in the wilds and stark bollock naked. He’s about five foot, broad shoulders, heavier than me, strong, square face with a day’s worth of stubble and the heavy red complexion of a farmer’s boy who spends all day, every day, outside weathering attractively in the elements. Ten minutes ago he was also straddling the quad fully clothed, which would have given him more than the advantage over me, without that amused half smile he also chose to wear.
Fully clothed might be an over-statement in this case, normally those elements that have weathered his fine features so much require more than an open shirt, displaying a V of that heavy reddening effect, a wisp or two of wiry black hair and a pair of tight jeans that amply display a bulky package of meat between those straddling legs. He’s a gay wet dream waiting to happen, I’m thinking, as I’m also trying to work out how the fuck I’m going to get to the heap of clothes on the bank by the pool, hopelessly out of reach now, separated from me by only two meters but also any amount of public decency you care to imagine. Nobody, not a soul? Well, how wrong can you be?
I don’t know what he’s trying to work out, with that half smile, but with a single athletic movement he leaps off his bike and grins broadly.
“Not a bad day for it” he says, thumbs pushed into the pockets of his jeans, hands splayed cowboy stance around his crotch, as if it needed emphasising.
Despite the mountain-cold water lapping around my pubes my dick gives an appreciative pulse. Too right, a perfect day for it. I cup my balls and prick automatically, wanting him to leave right now so I can get out and wank myself off while the memory of him is fresh but, instead, I manage to make a fool of myself mumbling – “Yeah, great day for it.” Like a naked, six-foot tall parrot.
That was ten minutes ago. Maybe nine.
“Don’t worry” he ventures, nodding at my hands, “had the same idea myself.”
I doubted, nine minutes ago, if he had exactly the same idea, as I felt my dick pushing harder against my cupped hands. But around eight and a half minutes ago I began to wonder, as he stripped off his shirt, revealing a pearl-sheened white skin topped off by that heavy red V and that angular square face. With a practised shuffle he lost the jeans and the plain, functional black boxers revealing a mass of wiry black pubes and a short, white little dick perched jauntily, if flaccid, over a set of heavy, hanging red balls.
Three or four confident strides later, though I was in no fit state to count, he was plunging his way past me into the water and, it could have been eight minutes ago, I was brought out of my stupor of shock and awe by the sensation of bitter cold water raining down on me accompanied by a throaty, deep laugh. The little bastard was showering me all over, circling muscular arms in the water and depositing it on me.
“Don’t just stand there man!” He laughed.
He had a point; the only way to get rid of that semi was to get deeper into the water, though as he dropped himself on to his front and started to swim out to the middle of the pool the sight of those two, fleshy, hard mounds that bobbed temptingly above the water was hardly likely to help. If you can’t beat them, so they say, you may as well join them. I dropped my body fully into the water and with a couple of strong strokes pushed myself through it to join him. I should have thought ‘what next?’ but at times like this thinking gets hazy.

Be the first to review “The Disappearance of Isobel Craig. Book One: The Farmer’s Boy by Robert Hall” Cancel reply