You are here: Products THE DIRTY SECRET by Kira A. Gold 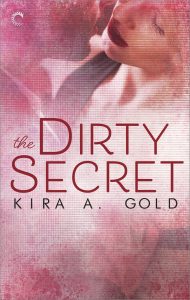 THE DIRTY SECRET by Kira A. Gold

From the Desk of Donna Edith…

My services are unconventional. My clients come to me with needs and I match them to other clients with needs of their own…

Promising young architect Killian Fitzroy: Driven, clever, eager to prove himself. Starved for sex, though he’s come to me for professional assistance, not personal. Needs: Someone unique, creative and fast. An artist with a feminine perspective to breathe life into a house he’s built.

Aspiring scenic designer Vessa Ratham: Sensuous, spontaneous, but secretive. Recently returned to Vermont armed with an art degree that qualifies her for little more than waiting tables. Needs: An opportunity to shine.

Yes, Killian and Vessa will satisfy each other nicely—in more ways than one.

Kira A. Gold is a costume designer living in Kentucky. Her sexy romance, THE DIRTY SECRET was chosen as a Top Pick by The Romance Reviews, and earned a starred review from Publishers Weekly. Her short story, A MIDSUMMER FLIGHT’S DREAM, from the FREQUENT FLYERS collection, was featured on usatoday.com. She enjoys—but isn’t very good at—knitting and playing darts.

Be the first to review “THE DIRTY SECRET by Kira A. Gold” Cancel reply