You are here: Products The Dirty Night by Sophie Anderson 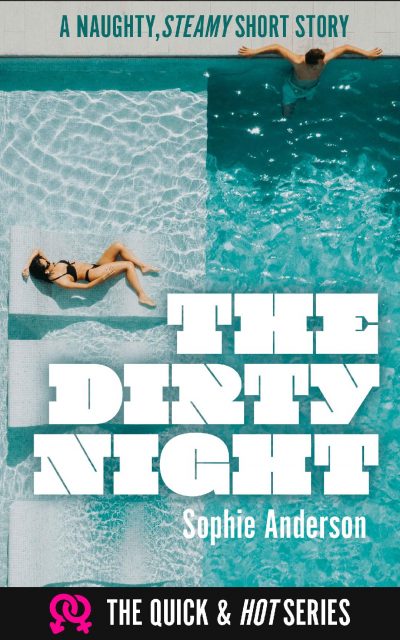 The Dirty Night by Sophie Anderson

Quick, sexy and dirty in this panty-melting fun book of erotica.

Hot, steamy stories for men and women. Enjoy by yourself or with a partner.

Lucy only went to visit an old friend but gets more than she bargains for when she finds herself the unexpected star attraction at a sexy party. What follows is a mind-blowing night of orgasmic thrills and unexpected surprises.

Sophie Anderson is the writer of the Quick and Hot Series.

The taxi pulled up outside the magnificent mansion in the middle of the country. Lucy pulled her sunglasses up to take in the view. She knew the house was going to be large but not to this scale. Wow. She was getting to spend the weekend here – she couldn’t believe her luck.

She paid the man and grabbed her bags. Once he’d driven away, she rang the bell. Someone buzzed her in. She walked up the extensive driveway, surrounded by a large lawn and beautiful flowers. The large double doors at the front of the house opened. A handsome, blonde guy with floppy hair stood there with what looked like a gin & tonic in his hand.

“You’re really early, the party doesn’t start until this evening,” he smiled at her as his eyes quickly appraised her up and down. He didn’t bother to conceal the fact and the smile on his face suggested he liked what he saw. She didn’t mind. She was used to men staring at her. In fact, she’d be disappointed if they didn’t.

“What party?” she asked.

She shook her head. “I’m here to see Annabelle. We’re old friends and she sent the invitation a couple of weeks ago.”

“Aah,” the cute guy scratched his head. “I’m afraid Annabelle doesn’t live here anymore. That’s sort of why we’re having a party. She and Roberto have split up, so he’s celebrating.”

Lucy looked shocked. “I had no idea. She confirmed the date a week ago and I haven’t heard from her since.”

He nodded. “I suppose she’s had a lot to deal with since Roberto served her the divorce papers.”

“Poor Annabelle. I should call her.”

Lucy made the call but there was no answer. She stood there awkwardly.

“I would invite you in but the party’s rather exclusive, unless… no forget it.”

“Unless what?” she insisted.

“No, no. I’ll call you a taxi. Do you want to stay for a drink and freshen up first?”

She agreed. It had been a long journey and she had nowhere else to be. The handsome man helped her with her suitcase and offered to mix her a G&T.

“How about we drink it by the pool?” he suggested.

His name was Alex and they arranged to meet by the sun loungers in fifteen minutes to give her a chance to change into her swimming suit. He led her upstairs to a spare room. A huge spare room, bigger than her pokey bedsit back in London. She quickly got changed and found Alex already relaxing on the lounger taking in the sun. His bronzed body was glistening in the sun. She appreciated his smooth, tight muscles and six-pack. Then he noticed her. He lifted up his sunglasses and now it was his turn to say, ‘wow.’

“This old thing?” She gave a twirl to give Alex the full benefit.

“Can it still be called a bikini when there is so little material involved?”

The triangles of her bikini top barely covered her large breasts. And the bottoms were more of a string then regular bikini bottoms, emphasising her perfectly, round smooth butt.

“Maybe a tini-bikini,” she suggested.

He laughed and patted the sun-lounger next to him. She lay down and relaxed.

He passed her his coconut oil.

“Would you mind?” she asked.