You are here: Products The Decision by Lorhainne Eckhart 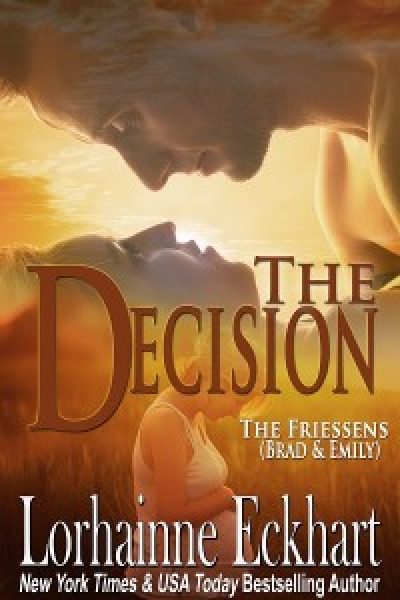 The Decision by Lorhainne Eckhart

The Friessens, stars of the bestselling series, are back with THE DECISION, another heartwarming fan favorite romance from New York Times and USA Today bestselling author Lorhainne Eckhart.

Emily Friessen has everything a woman could want: a husband who’s the love of her life, a family that stands together, and children she wouldn’t trade for anything. To everyone around her, she’s confident and strong—but then, she has to be with a man like Brad, who is all about family and too handsome for his own good.

Emily isn’t as together as she appears, though, and when life throws her and Brad a curveball, it tests their relationship, leaving Emily scrambling and feeling very much alone as both are faced with a decision no parent should have to make.

She is frequently a Top 100 bestselling author in multiple genres, such as romance, western, military and mystery/suspense. She has written multiple series, including The Outsider, Walk the Right Road, The Wilde Brothers, Saved, The Friessens, and her two newest additions, Married in Montana, and her high-stakes suspense and sizzling, red-hot romance series, Kate and Walker, Deadly, Dangerous and Desired.

My fans are the biggest inspiration for me to keep writing about The Friessens. This big family romance series began with The Forgotten Child, a bestselller selling more than 500,000 copies worldwide. The Friessen family made up of three brothers, and a cousin along with their families have become my most requested series. I love writing books about family, ones that celebrate, love, commitment, hope and flawed characters, ones we call all relate to.