You are here: Products The Dart Murders by James Kipling 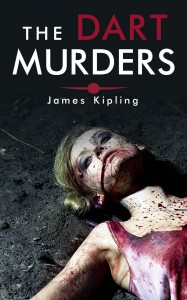 The Dart Murders by James Kipling

Close to London, the tiny and fanciful town of Amersham is shaken by a sudden spate of homicides. The first to meet her unfortunate fate is a young woman named Jane Ferrier, murdered by a poisonous dart while walking home from work on the evening of June 15th. While on a holiday with her beau, Sarah Parker was killed in a motel room on July 15th, also the victim of a venomous dart. On August 15th, a young attorney named Michelle Pearson was found dead on a local park bench as the result of a toxic dart. As seemingly different as all three victims lived their lives, they did have something in common. In addition to having green eyes and blonde hair, the ill-fated individuals had a history of turbulent love affairs.

With Chief Inspector Patrick Campbell in charge of the case, can he and trusty colleagues Inspector Geoffrey and Constable Tim put a stop to the mysterious serial dart killings? Much to his dismay, the investigator soon discovers that the men involved in the case all have secrets of their own that, once unraveled, don’t make them as innocent as they would appear. What do the admirable Eric, suave Neil, apprehensive Jeremy, modest Wilbur, calm Philip, passionate Victor and vibrant Tony possibly have to hide?