You are here: Products The Darkness of Glengowyn by Isabo Kelly 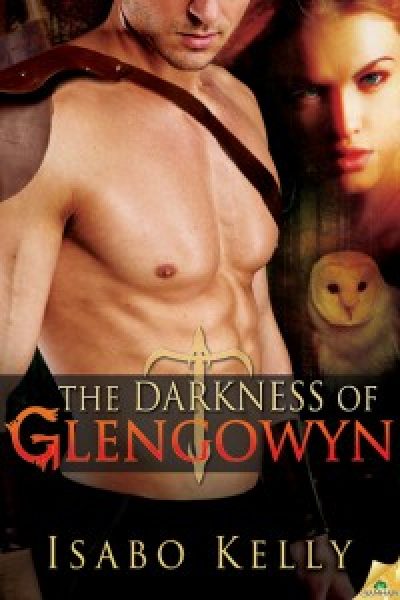 The Darkness of Glengowyn by Isabo Kelly

They’ll risk forever death for one last chance together…

Nuala of Glengowyn hasn’t left her home city in over a century, but not by choice. Her skill as a weapons master has made her a prisoner of her people. Held apart, protected in the extreme—until Sorcerers attack the human city of Sinnale.

Sent to supply her unique magical arrows to help the humans, she is far from free. The elf king and queen have sent a bodyguard, a fearsome warrior whose reputation has no rival. The only man she has ever wanted. Einar of Glengowyn.

Einar is known as a battle-crazed destroyer, so feared among elves he’s called by a single name: Darkness. And he has only one weakness—Nuala. Their union is forbidden, for melding their magics could destroy Nuala’s gifts. Yet as they journey to the war-torn city, no royal decree is a match for two hundred years of pent-up desire.

But even if they escape the war zone, their lives still hang in the balance. They must confront their sovereigns and prove love makes them stronger—or face their deaths.

This book contains a deadly elf hero, a heroine who’s his match, a lot of sexy misbehaving, some hard language, racing through the streets, owls, arrows, evil Sorcerers, wicked minions, and a very dangerous elf king and queen.

Now Isabo focuses on writing. She lives in New York with her Irish husband, two beautiful boys, and funny dog. She works as a full time author and stay-at-home mom.

This is book 2 in the Fire and Tears series. I was inspired to write it after I’d published the first book and realized there were a lot more stories I could tell in that world. The hero–Einar– introduced himself to me and of course I fell in love. So I had to get him an equally cool heroine, and I realized the brothers from book #1 (Brightarrow Burning), had a cousin who made weapons. The story went from there. I love writing the forbidden love story too. There’s just so much intensity and passion in forbidden love!

Nuala stared at Einar for a few more minutes, caught by his intensity. To escape, she glanced down at his injured arm. “I can wrap that for you.” She gestured to the wound.
He gave it a cursory glance. “It’s only a scratch.”
“But neither of us can afford to have you weakened.” She spun in a slow circle, then started opening doors. When she found a room that contained a couch, she led him inside. “Sit,” she ordered.
Without supplies, her only option for binding the wound was the hem of her riding robe. “Your knife.” She held out a hand without looking at him and pulled up the long length of material.
“It’s not necessary.”
“Don’t argue.” She wiggled her fingers, still focused on the material in her hand. His presence threw her off balance and looking directly at him made it worse. They hadn’t spent this much time together, alone and in close proximity, since…
She didn’t want to think about the last time.
After the knife hilt settled gently into her palm, she sliced a few lengths of silk along the split front hem of the robe. It would leave a wider V in the front, but since they had to travel quickly, she was considering cutting off the length completely anyway. Once the sun set, the early autumn nights were too cold to get rid of the over-robe altogether. It was designed to allow easy, free movement, with slits in front and back so she could sit astride her horse without the long material getting in the way. It had stayed out of her way during the earlier fight too. But those lengths of material could be put to better use. And the less she had to worry about right now, the better.
Once she had sufficient improvised bandages, she turned to Einar. “Take your tunic off,” she said, her voice as firm and emotionless as she could make it.
She tried not to be affected as he stood, removed his scabbard belt, then slipped his short vest off and dragged his tunic up over his head. Unfortunately, she couldn’t hold back her quickly drawn breath when the magnificent musculature of his chest was revealed in full.
This wasn’t the first time she’d seen him bare-chested, but the sight never ceased to stir her. When she looked up, she found him staring at her, his dark eyes black in the dim light leaking in through grimy windows. She swallowed and focused on his arm. Her heartbeat sped as she drew near enough to feel the heat of his skin and smell the tangy combination of his natural spicy musk mixed with the sweat of battle. With Einar, that combination had always overwhelmed her better judgment, targeting her most desperate desires. Only with him.
Yet another reason she’d spent so many years avoiding him.
Though her pulse pounded in her ears, she concentrated on making her hands steady, her touch gentle. She used one length of material to gently blot the worst of the blood away. Some still seeped slowly from the injury, but not enough to be dangerous. Once she’d gotten the area as clean as possible with a dry cloth, she used another length to tightly bind the wound.
His muscles flexed under her touch, which didn’t help. “Relax,” she ordered, her voice irritatingly husky.
He let out a long, slow exhale that brushed over the top of her head, and his biceps relaxed. She noticed at a glance, however, that his stomach muscles were tightly clenched. When she risked a peek at his face, his jaw was also tight, and he stared at the wall across from where they stood.
She turned back to her work, knowing she shouldn’t have risked this kind of proximity for this long. Einar had more power over her body and heart than any other elf. A fact they were both growing more aware of with each passing moment.
When she’d tied off the bandage, satisfied it would do for now, she stepped back and gestured at his leg without actually looking down. “Are you cut or was it just your trousers?”
“It’s nothing.”
“Nothing as in no blood, or nothing as in you don’t wish me to bandage the wound?”
His gaze jumped from the wall to her and she took another involuntary step back. Heat, promise, need and something she didn’t want to admit seeing blazed out at her, an arrow right into her heart.
“You made it clear,” he said quietly, “that your magic was not something you could sacrifice. We should not remain this close. And I should not take off any more clothing around you.”