You are here: Products The Darkest Frost, The Complete Serial, Volumes 1 & 2 by Tanya Holmes 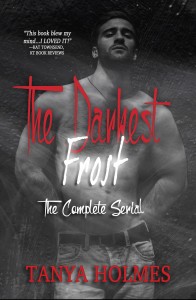 The Darkest Frost, The Complete Serial, Volumes 1 & 2 by Tanya Holmes

When the ghost of her best friend begs for her help, psychic detective Denieve Knight goes undercover as a live-in domestic to catch a killer. She sets her sights on the most likely suspect: her friend’s mysterious employer, Doctor Braeden Frost.

Dubbed “Dr. Death” by the press, the notorious hematologist is linked to nineteen other suspicious fatalities—all are former patients. The brooding recluse is a man of many secrets, the darkest of which may be lurking beneath the leather gloves he never removes.

The job seems simple enough at first: go undercover and catch her best friend’s killer. But psychic detective Denieve Knight gets more than she bargained for when she enters Dr. Braeden Frost’s estate as a “housekeeper.”

She’s supposed to be sleuthing, not falling under the spell of the enigmatic doctor and his irrepressible, hellion of a brother, Xavier.

Now after two months of working for the man known as “Dr. Death,” she’s entangled in a web of secrets and lies. Each discovery only leads to more questions. Though faced with declining health and a storm of confusing feelings and simmering passion for both brothers, Denieve is determined to uncover the truth—consequences be damned. Yet the truth may prove deadly once she discovers just how deep the rabbit hole goes.

Bestselling Author Tanya Holmes is a Golden Leaf double-finalist, a Romance Writers of America Golden Heart finalist, a recipient of the Maggie Award, the MICA Award, as well as Overall Winner of the Sandy Haddad Award and a two-time finalist and one-time winner of The Emily (Best of the Best). She’s happily married with children and loves reading, writing and a good cup of coffee—but not necessarily in that order.

It wasn’t just one thing. It was a hodgepodge. TV, music, poetry, photographs, conversations…novels like Jane Eyre, characters like Mr. Rochester, TV shows like Highlander and Star Trek. Yes, believe it or not, all of these unrelated things flavored this novel.

Frost set the book aside with casual grace, then prowled toward me, his gloved hands clasped at his back. The quiet thud of his footsteps matched the pensive rhythm of the ticking clock, amping my fear.
Despite his cool demeanor, I was sure the man had his temper on a short tether. That’s why I didn’t look above his neck for fear of seeing that anger twisting his face, or worse, blazing in his eyes.
Silky chest hair peeked from beneath his T-shirt. And he seemed dark and dangerous in those faded jeans. The soft denim hugged his muscular thighs while loosely cupping the masculine bulge between them, the bulge my body was all too familiar with.
Down low, my sex clenched in remembrance as he made his approach.
“Now that you mention it,” he mused in the gentlest of tones, “needles are a tad frightening.” He dipped his head, forcing me to look at him. “Tongue depressors are even worse, but you should be especially wary of thermometers. One can never be quite sure where they’ve been.”
“Really, Dr. Frost. Ever since….” My gaze followed him until he disappeared behind me.
“Go on,” came the soft voice at my back.
I swallowed. “E-ever since I was a child I’ve been afraid of thermometers—I mean needles!”
Frost reappeared on my right side. One of his brows rose a fraction. “You know, if you’re going to lie to my face, at least do it better. On second thought, just leave. I have no patience for nonsense today.”
“But I’m not lying.”
Yeah, I was.
He slammed to a stop in front of me, his expression a complexity of shadows. “You must believe I’m a fool.”
“I don’t.”
“Yes, you do.”
“No, really, I.…”
“Enough. How about some brutal honesty?” Now his tone was menacing and sharp. “You think I couldn’t read your face? That I wouldn’t recognize mistrust and contempt? Or fear? Especially in someone I’ve—” He inhaled sharply through his nose and looked away. “Someone like you,” he finished, returning his gaze to mine.

Be the first to review “The Darkest Frost, The Complete Serial, Volumes 1 & 2 by Tanya Holmes” Cancel reply