You are here: Products The Dark Priesthood: Confessions of Malevolence #1 Lover Undefined by Sai Marie Johnson 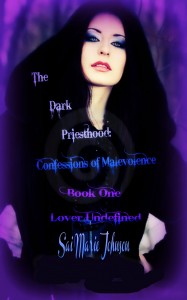 The Dark Priesthood: Confessions of Malevolence is a series about the Sanguine Lineage, and coven. The main character, Queen Deviaun Sanguine is first introduced to readers in this premiere story in the novella created by Sai Marie Johnson. In this story Deviaun is positioned as queen of the Malevolent Order, and some thereafter faces the grave threat of being overthrown by her twin sister, and her very own son. A gothic story with erotic elements this tale is sure to get lovers of vampire tales enthralled all the while bringing a new take to the typical witch, and vampire coven make up.

A mother of four children including a daughter, and three sons Sai Marie is a creative mind who enjoys a plethora of activities. Married to a Veteran, and owner of a dachshund she likes to spend her days writing, reading, and discussing the art of the quill, pen, or keyboard. With a wide variety of subjects Sai doesn’t consider herself a genre writer, but rather an author of whatever happens to come to mind. With a Bachelor’s Degree in Creative Writing as of September 2014 Sai writes everything from poetry to scripts in every category from Non-fiction to fiction including children’s stories, erotica, historical romance, and sci-fi. She really is so varied that it’s hard to put her in any category.

I was inspired by dark noir erotica based on covens, and demonic entities that I had researched. It was my take on a mix between witches and vampiric elements which came together as a Caballi demon sect.

Be the first to review “The Dark Priesthood: Confessions of Malevolence #1 Lover Undefined by Sai Marie Johnson” Cancel reply