You are here: Products The Dark Ones by Gaja J. Kos 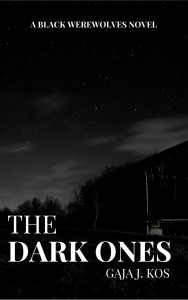 The Dark Ones by Gaja J. Kos

In a world ruled by lethal Slavic immortals, Rose and her pack of Black werewolves are drawn into the beginning of a war as they try to uncover the being behind the mass murder of White werewolves.

Because the nature of the killings obstructs the normal passage of souls, Veles, the sultry lord of the underworld, offers Rose his assistance; the were is left facing not only the new knowledge of the pack’s hidden lineage but also her growing fondness for the arrogant god…

To win the war, the pack must ascend to The Dark Ones. But to do so, they must be willing to risk being on the receiving end of the immortal community’s wrath

Gaja resides in Celje, Slovenia, with her husband and two Chinese Crested dogs.

Rose growled in response, her eyes gradually adjusting to the illuminated environment. The chamber – and it truly was a chamber in the aristocratic sense of the word – was richly decorated, cobalt blue walls lined with deep gold streaks, the same shade that tastefully framed the sizable arched windows embedded alongside the whole length of the wall, flooding the space with sunlight. By the luxurious vintage upholstered furniture she safely presumed she was standing, or rather was being forced to stand, in the middle of a sitting room.
“Oh,” she exhaled, bottling her anger as she traced the origin of the words to a tall figure, leaning back in a gold-dipped futon. “Hello, Veles.”
Although Rose had never met the god in person, he was substantially linked to her bloodline, making it impossible for a descendant of Mokoš to be unaware of his existence – or his decadent reputation. Despite her combative instinct, she slowly shifted back into her fully human form, with Veles’ olive green eyes observing her intently.
“That’s much, much better,” Veles’ seductive voice caressed her senses, making Rose even more angered by her indisputable abduction. “Let the hellion go.”
Rose scowled at the cocky god; nonetheless, both pairs of hands released their grip in flawless coordination, allowing Rose to let out a breath she wasn’t aware of holding. The figures disappeared through the door before she managed to catch a glimpse of them, leaving her alone with the god.
“Come, take a seat.” Veles tapped on the intimately small vacant spot next to him on the futon, the corners of his lips tugged in a devious smile.
Rose approached him, but confidently sat down on the adjacent sofa, returning the smile. Veles observed her, intrigue flaring in his glimmering green eyes.
“You are willful, aren’t you…” It wasn’t a question. He shifted upward, flexing his arm across the headrest, displaying his slender, yet muscularly build body, clad in tight black leather pants and a black T-shirt that hugged the light swell of his athletic chest. A smug expression formed on his face as he caught Rose’s eyes wander over his outstretched body.
Silently Rose cursed herself for the slight slip-up, and – fighting the blush that wanted to taint her cheeks – forced her gaze to stay on his eyes only. Not that Veles made it any easier for her, since she saw nothing but hunger within the rich olive green color, rimmed with a subtle line of pure black.

Be the first to review “The Dark Ones by Gaja J. Kos” Cancel reply