You are here: Products The Cursed Series, Book Six Klaas by Aleena Stark 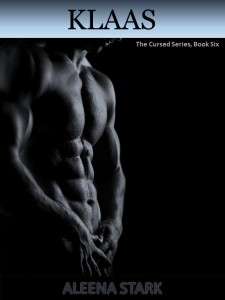 He would defy and army to save her.

She would give anything to remember.

For months, Cursed warrior Klaas watched from the shadows, waiting, yearning— for her. From the moment her scent flooded his senses, he knew she was his. All thoughts of his former life abandoned, he would do anything for her— including face an army of elite heavenly soldiers.

Jody realized the moment she saw him— Klaas was different. Little did she know he would awaken more than her heart— he held the key to unlocking her memories. Will her need for him lead her back into a world filled with danger and sorrow, or can they escape the dark secret threatening to tear them apart?

How long can they run before the past catches up to them?

Now, I live in Maryland with my patient, loving husband and a very burdened cat. Every morning, though I’m sure he would love nothing more to sleep in and enjoy a life of leisure, my timid, black cuddler wakes me without fail at four o’clock, often with a triumphant whooping meow having acquired breakfast for me of some poor unsuspecting mammal who could weigh up to and including his own body weight.

I love to write, and I hope the joy I felt creating this wonderful story comes through to all my readers. This book resulted from the single though: What would happen if everything you knew was erased? A regular person would relearn how to live in the world around them, how to blend in, but my girl wasn’t normal. The people who love her aren’t either. I took the idea let it snow ball. The result is a compelling love story, between two human hearts, trapped inside a little more than human shells.

Jane inhaled a breath of toasty burning wood. Blinking her eyes open, she glimpsed a puce shade of fur spread across her bed, and closed her eyes again. Popping them open, she scanned the room in which she slept realizing the entire area seemed to be covered in leather. Not covered in it, made of it.
She sat up and a thick fur blanket fell from her shoulders, revealing her body— completely naked. She had never seen the bed before, never been inside the strange tent, or smelled such a soothing aroma in her life.
A deep growl sank into her mind and she glanced at the fur wondering if the beast from which it was skinned was still attached. She felt convinced it lived as a thick piece of flesh draped leisurely across her lap moved. An arm.
Holding her breath, she followed the movement of the limb gripping her to find it joined to a tanned human shoulder. Not an animal, thank God. But her relief was short lived as she realized the shoulder connected to a massive muscled back. A decidedly masculine back. The muscles flexed and she fought the urge to reach out and study each contour of the bronze body with her fingertips.
Another growl.
Jane stopped her perusal of a perfectly rounded derriere and long legs, glancing upward, above his massive shoulder, into the dark.
Suddenly, the arm pulled and she found herself shoved under the incredible body, but amazingly felt no weight bearing down on her.
“My mate,” his seductive voice hummed. The deep timbre sent a wave of intrigue through her body, and she knew she wanted more.
Failing to respond to the voice, she swooned from his intoxicating warm breath. Then he descended. Supple smooth lips captured hers, pressing them apart and a wet spice covered tongue invaded her mouth, caressing and savoring.
She felt consumed, and she wanted more. Her hands wrapped around the back of the mysterious naked man and she found herself surrendering to the rapture of his kiss. More, please more. Her core ignited, kindling a fire she couldn’t clench. Only he could.
She had never been kissed before. Even without her memory intact, she knew she had not. She could feel it, but she found herself desperate for his touch.
His lips left hers trailing a moist line from the corner of her lips, over her chin, and along her neck. Her hands fell limp to her sides, and she released a moan of need into the air. The soft tickle forged a path over her skin leaving gooseflesh in its wake. His lips captured a taut nipple, and she screamed as his teeth nibbled and his tongue laved. Head thrashing, she moaned and wiggled as his mouth abandoned her nipple wet and cool, gifting the other tip the same affection.
His lips crested the curve of her breast placing a reverent kiss where the globe met her stomach. She could hear him growl, like a hungry beast, sliding his lips across her stomach kissing his way to her navel. Her legs trembled, and she cried out when his tongue dipped inside. Suddenly, his mouth disappeared and his cheek brushed her skin, the weight of his head settled on her lower abdomen with a whisper, “Mine.”

Be the first to review “The Cursed Series, Book Six Klaas by Aleena Stark” Cancel reply