You are here: Products The Cursed King by Abigail Owen 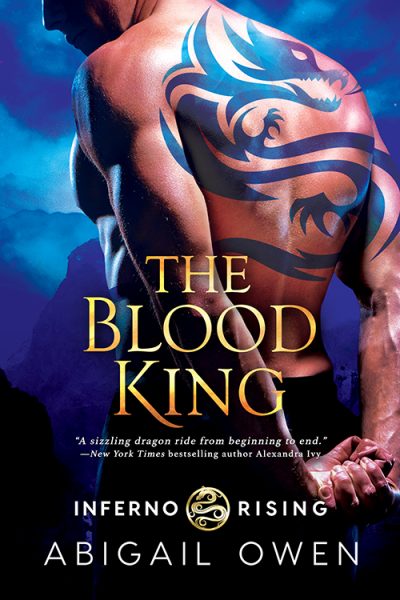 The Cursed King by Abigail Owen

Airk Azdajah, the rightful King of the White Clan of dragon shifters, spent half a millennium being tortured by the false High King Pytheios. Airk escaped, but he’ll never be truly free. What good is a king who can never let his feral dragon loose, never fly, and never lead his people? He’s better off dead.

Angelika Amon is the last unmated phoenix. The problem? She has no powers. Zip. Zilch. Angelika hates being dormant, especially when she needs to be part of the fight to take down her parents’ killer. What good is a useless runt of a phoenix in a battle to save the dragon kingdom?

Desperate to find some way to help, she offers herself to Airk as a mate — just for political leverage. But a dormant phoenix is no damn use to him just like a dragon who can’t shift is no use to her. Until Pytheios sets his sights on Angelika for himself…

“Airk.”
The sound of his name was barely a whisper on the wind. His enhanced hearing picked it up, and everything inside him went stock-still with recognition even as he kept moving.
He was immediately slammed with a memory. Angelika Amon standing before him, gorgeous in a figure-hugging gown for her sister Meira’s mating ceremony celebrations. Her frosty white-blue eyes had searched his as she’d asked him a question. “Have you decided what’s next yet?”
That’s how she’d started it.
Then she’d gone on about how she wanted to help him reach out to the White Clan and maybe turn them away from Pytheios, make them allies of her sister’s clans. How his people needed a new king to lead them to the other side of the war.
He’d been stupid enough to ask how, and then she’d said the words. Words that pierced the usual numb he kept wrapped around himself.
“If we were to mate…”
Hells. Airk had done the only thing he could. It had taken everything in him to do it, but he’d said no, unequivocally, and then he’d walked away.
He’d been avoiding her ever since.
What the fuck was Angelika doing here? And where was she?
He searched the mountainside for a glimpse of her. Was he hearing things now?
At a tiny movement, he jerked his gaze to the right, and he damn near tumbled ass over head at the sight of her—long, white-blond hair tossed in the winds whipping at the mountain, framing her perfectly heart-shaped face.
She stood hunkered down in a doorway, beckoning him like the siren she was with a tiny wave of her hands, no doubt trying to not also attract the attention of the dragon overhead.
Through the emotionless numb where he usually existed, a gut punch of fury swept through him in a scorching wave at her recklessness showing herself here like that, risking her preciously rare phoenix neck.
Airk didn’t have time to argue with her methods right now, though.