You are here: Products The cursed girl by Maria Vermisoglou 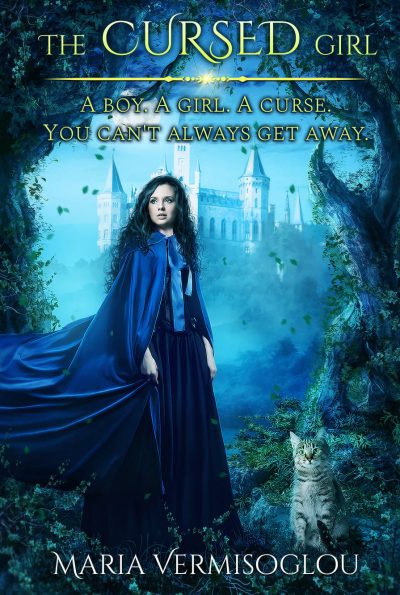 The cursed girl by Maria Vermisoglou

Sixteen-year-old Eva is a witch who lived in Spain, in the year 1230. She met a boy named Jonathan who would become her whole world. Everything was normal until she was faced with challenges that will change her life forever.
As a healer, her job is to help people, but there are forces that will try to prevent that. There is a war coming and Eva and her friends must do everything they can to survive.
Can they fight their way against the dark forces that are surrounding them? Her wits and inner strength helped everyone who encircled her to survive but will she be able to survive herself?
Supernatural creatures, royal backstabbing and many more await you in this thrilling novel that will take your breath away.

My name is Maria Vermisoglou and I am a librarian. I live in Greece. "The cursed girl" is my first attempt in writing. In my free time, I like to read and make handcrafted items. I love books and travels.

I have always loved books. When I finish a book I imagine alternative endings. So, one day I finished "The Heavenly Fire" and I wondered, what if Clary was a witch? That's how Eva was born. My main inspiration was the book series "The Mortal Instruments" and the tv series "Witches of East End."

You obviously expect a nice story, something that will make you laugh or feel excited. You think this book will get me away from my boring reality, but that’s the thing with books—they transfer you mentally to another reality for a little while. But this book is not like any other book you have ever read. This book is real. You will experience my life, through my eyes and feel real danger. I warn you because this is your last chance to choose another book. Romance, perhaps or a funny story? Even better. My story is no fairy tale and no happy ending is included. If you think your life sucks, think again because my life is like a living Hell on Earth. My friend Ritta persuaded me to write it down so I would feel better—like this is going to change anything…
My name is Eva and I am a witch. I was born in 1214 in Spain in a little village, at least the first time. Of course, your question is obvious: Why am I still alive? Witches live many years, but we are not immortal; we can die. There are many tales about witches, but I will tell you the truth, since most human tales are just that, stories for scaring children. I see the world differently and believe you should know the truth. I am an artist, and many have blamed all my time spent drawing for my different beliefs. I am also the princess of witches—yes, they have princesses—and there is a queen, but that’s a story for later.
You can be a witch in many ways, but the most common way is to have a parent who is a witch. We live in a hidden land called White Land. It’s not visible, so don’t look on a map—you won’t find it. Our land is among the stars, so it’s not easy to find it. It is peaceful and magical and for every witch it is a home, a paradise.
The White Land is safe. No one goes there unless invited, and we live our lives happily, but we have our fights too. Witches have many kinds of jobs such as healers, teachers, shop sellers, and seers who can see the future so they can tell you if a big threat is near. No, fortune tellers are humans who are mostly liars. Please. Seers can see so many things they can give you a headache. Every witch has a different gift she can use. The queen is the one who handles the bureaucracy job as humans say: she ensures peace, breaks the fights, and solves problems, but the princess goes to fight with the big guns: killing demons, evil warlocks, and creatures associated with dark magic. Lucky me!
Our job is to protect the Earth from demons, so we guard the borders of the Earth and kill them before they enter. If by any luck they enter—it happens—hunters take care of them. Hunters are humans who kill supernatural things like demons. They don’t know about us. Nobody knows about us because there are so few of us, we tend to remain hidden to protect ourselves.

The first time I traveled to Earth, I opened my eyes, and I saw colors, plants, animals, and humans. We were in Spain because my mom wanted to see the Earth. We protect the Earth, but we usually don’t visit it. My mom was a curious witch, so one day she just took me and went. I was two so I don’t remember anything specific about the trip.
I grew up in a small village, and when I was eight, I learned the truth about me. You might ask if eight wasn’t a little young. Yes, it was, but the earlier you learned who you were and how to defend yourself, the better. At first it was fun. I mean, come on, who doesn’t want to be a witch with magic and to know there is another world? I know better now, unfortunately, it’s bad and ugly and a world full of dangers. My mother, Angela, knew, and that’s why she left. She wanted a normal life for me, so we went to Spain. It was quiet, the people were friendly, and I liked the happy life of growing up in a village.
A few years passed, and I went to the White Land to train at the Academy. Twice a week, I went down to Spain to see my mother. Life was good. Humans fought their wars, but we didn’t care much about them and only moved if war was too close to us. I enjoyed my training and my life until the day I became sixteen.
Those days when a girl was sixteen, witch or not, she had to marry someone, but I didn’t want to marry anyone. I just wanted to live my life, travel around the world, draw, and have adventures. But no, there was a stupid protocol that everyone from the princess down to the lowliest peasant had to follow. I didn’t care about why the rule was created, but why wouldn’t the princess tear it up?
When I turned sixteen for the first time, I was in Spain. The next day, a witch showed up at my door. The male witch—don’t confuse them with warlocks, they are different things—stood there and asked me to marry him with a poem. Cute, but I kicked him out of my door. I didn’t exactly kick him, but I told him that I wasn’t interested. Another one showed up the next day followed by one the next day and the next and the next. It was not just witches, but humans too, and they all were given the same answer: a no and the door slammed in their faces. Do I have to hang an announcement on my door?
I was so furious it rained for days, and after that they got the message. A month later, while I was shopping in the market, someone bumped into me and all my fruits spilled out of my basket onto the ground. I was so furious I was about to turn him into a frog, but then I saw him and his expression was… sad.
He said, “I am so sorry, my lady.” He put everything in the basket and kept apologizing like he had committed the most horrible of crimes, and I just stared at him. He had black hair and blue eyes. He was tall and looked to be about seventeen years old. Then he said, “I want your forgiveness, so can you accompany me to the ball of the prince tomorrow night at the royal castle?”