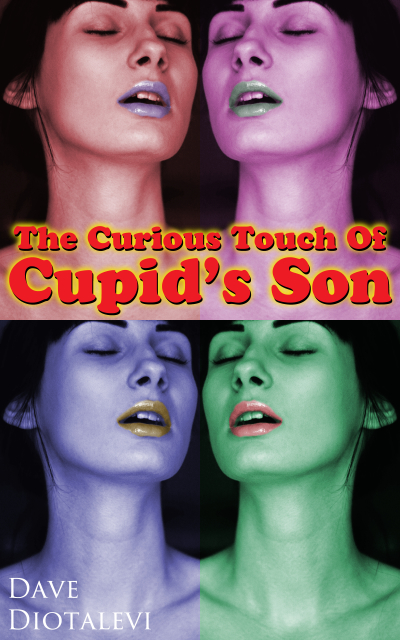 Karl Sparks knows everything about love except how to fall in it.

What he does know it that his touch–however slight or incidental–rockets any woman into the most intense and dizzying orgasm of her life, whenever and wherever it launches (a Midas-touch curse he would do anything to be rid of).

Happens 100% of the time–that is until he literally bumps into Aurora (Rory) Sky, who does know who her mother is (she thinks). Karl’s touch has no effect on her, and to her surprise, the unnatural ability she’s always owned of infallibly controlling men through her verbal commands fails to faze Karl.

Her presence does give Karl his first erection.

She, unable to trust any of the men she mystically dominates, and he who can’t touch women–shouldn’t these two misfits who only fit each other find romance? Fall in love? Get intimate? Become lovers?

They discover secrets about themselves and each other in a series of laughably lusty adventures to find the three pieces of The God Prism, a mythic relic capable of lifting their cursed abilities.

The unwitting lovers’ passion deepens until it’s ultimately tested by a selfless choice of sacrifice and devotion.

Announcing. That’s what she was doing. She? I’d seen her type before–and heard them. An “Announcer”–that’s what I called her, her type.

A woman’s roaring voice, voicing her orgasmic joy in the privacy of her bedroom, his bedroom–someone’s bedroom–or even in the confined, cramped, uncomfortable space of the back seat of a car, when in the company of her partner (or alone, using fingers or various friendly and happy devices) is a beautiful and welcome outpouring of release.

Those same sounds echoing in the confines of a crowded elevator prompt a whole ‘nother response: the small dog in Mrs. Rich Woman’s arms yipped and shook with startled nervousness, Mr. Businessman with the brown jacket and yellow-striped tie backed up and pushed at the bridge of his glasses, the teenaged lovers (here I’m assuming because of the touching, kissing, and dreamy gazing that had never stopped since they had gotten on) evolved initial surprise into sniggered laughter, and the young mother with her daughter huddled protectively together–maternal gravity gathering in her child.

Me? Karl Sparks? I escorted (that’s sounds better than dragged, right?) the maybe-thirty-year-old woman to the back left corner of the elevator where her weak-kneed climax could … well, climax without her falling over and injuring herself or the dog. I lowered her to the floor and slunk silently to the opposite corner of the elevator, near the doors, which couldn’t open quick enough for me.

“You have an eyelash,” she had said, the woman, the now-spasming woman. With a big smile and helpful giggle she had said it. I saw she had lovely green eyes and a constellation of perfectly spaced freckles on her cheeks as she intently looked at the offending eyelash that apparently escaped being rooted in my lid’s neat row. Her lipstick was a much paler red than her hair, all curled there and unaware of the shaking and thrashing it was going to take as its owner torture tested it. Miss Red Hair’s helpful smile changed right on cue (cues I’d gotten to know too well—and dread) when two of her paintless fingernails pincered the Good Samaritan bait of my eyelash and the “magic” once again happened when flesh met flesh–my skin and a female’s.

I could have told her: “Don’t touch me or you’ll get an orgasm, a mind-shattering, never-to-be-forgotten orgasm.” But, who goes around saying that? Not Karl Sparks (well, not often, that is).

She yodeled that prognosis every so often as she comfortably slumped and shuddered in the corner. “Cried,” in this case, could also be applied because there was a plaintive sob in her voice, a pleading, if that’s what “plaintive” means. There were, of course, other sounds coming from her between the verbal announcements, but those were of some more primitive language of pleasure that no human has to be taught to utter or interpret.

The elevator in the Nadir Building had previously made its diligent way down decades of floors with only the bluish x-ray glare of the overhead neon lights and (now that I think back on it) the slight subliminal hum that sings those rays to the occupants. Other sounds were the usual: clothes sliding, fabric on fabric; a dog (Pomeranian, I think), mouth open, moist tongue hanging and helping its panting, all the while keeping its eyes on me; and normal human sniffs and coughs and swallows that go unnoticed until you listen for them. (There were of course some sub-sonic whisperings between the teens, probably unfavorable evaluations of the other passengers, judging from the body language.)

Until Miss Red Hair engaged. You don’t engage on an elevator. Isn’t that a law in Massachusetts? in Boston at least? in Cambridge even? Or at least a guideline or rule of thumb mothers teach daughters? Don’t engage—especially don’t engage strangers. Even when you know somebody, you kind of shut up on an elevator, as much as a courtesy as for your own privacy. And try not to touch each other or brush up against each other as much as possible. I thought I was safe.

She didn’t follow the rules, the universally accepted elevator rules, and now she was an Announcer. I’d say she deserved it, but nobody deserves it and I feel a helplessness and an anxiety each time it happens: this orgasm thing.

When I was a kid, it frightened me. Why wouldn’t it? All that screaming and groaning and writhing, all out of nowhere. It didn’t take me long to learn to keep my hands to myself. To this day, like this day, I wear surgical gloves in public and tell anyone who asks I have skin problems, allergies.

"She's scaring Mr. Ruffles." The woman with the dog jingled her jewelry as she hugged the little dog she accused of being so-named. "I know what's happening … to her … on the floor." She pointed with her chin to Red since her hands were so full of tiny and trembling dog.

"You DO?" The sound had come from my mouth, completely breaking past my usual iron-willed compact with myself to stay uninvolved and quiet when in the presence of a climaxing woman that I had somehow, maybe been the cause of. Mr. Ruffle's owner had squeezed my ill-advised question from my Red-distancing self.

"An attack, she's having an attack, and it's scaring poor–"

“–Mr. Ruffles," I finished. I couldn't bear hearing her name him again.

"She all right?" It was a small scared voice. A child's voice coming from behind the mother who shielded the peeking girl. Mom stood between Red and her daughter, holding her back with the flat of her hand. There was no holding back the sounds groaning forth or the jerking rustling of Red's clothes and body against the elevator's hard corners. These liberally invaded all of us.

I made some noise of my own: the ineffectual click of the lobby button on the illuminated panel in front of me. I had heard if you press the button over and over it makes the elevator go faster. I probably had heard it in my own wishful mind, and there alone.

"What can we do?" Mr. Businessman asked, ready to help.

"Give her air," I said. This sounded better than Get away from her and let her cum, let it all play out! like I've seen dozens and dozens (and dozens) of times. Time–there's no set time for these things, and by these things I mean the unnatural orgasm caused by an unwilling catalyst. Me, the catalyst in most cases. In all cases I know of, but I wanted to admit the possibility of someone else in this big world having the same power. Hmmm? Was it a power or a curse? I would think about that when not in the presence of the fruits of my “power.”

Everyone backed up, obeying my useless prescription and all crowding my way into the opposite corner of the elevator. Red had plenty of air now to fill with her–

There, another wave of apparent ecstasy broke on the balmy shores of green-eyed girl's oblivious beach. I should be able to gage whether it was high tide already, if the "fit" was about to wane–I'd been through this enough–but, I had no idea. Orgasms were as unique as I had been propagandized into believing snowflakes were. Each woman's orgasm was her own hot, melty, sloppy, floating snowflake. Maybe how fast it evaporated depended on how frozen it was to begin with and the emotional temperature her furnace could be cranked to. Maybe.

I didn't know, being a layman and not one of those fancy scientists who deal with those types of intricacies.

"What's she sayin', again sayin'!" I recognized that voice. It was the one (other than Mr. Ruffle's or his owner's) that I dreaded hearing most in this prison cell. It was the young concerned and helpless voice.

"She's calling for her mummy," the mother said. She said it with enough conviction and surety that maybe her daughter believed her. Sounded like, to me, that this mummy knew exactly what was going on where Tigris met Red’s Euphrates.

Smart of her to use assonance and near rhyme in her explanation. Could be she was a rapper. (Naw ….)

The temperature had risen in the thirty or forty square feet that was our shared world for the ride down. All that breathing and surprise and anxiety–and don't forget the churning of Red's engine. That had to have moved heat needle on the indicator. My face felt damp or moist, wet with a "no, no, no, not again" guilt at having been a part, well … okay, the cause of our "situation."

The elevator container we were in can be called a “car” or a “carriage” or a “cage.” It felt like a cage today–me clawing to get out (well, tapping tenaciously at that button), and when it jerked to a stop, I felt as if I was released from jail. My back had been pressed against the door, forcing myself as far away from my climaxing redheaded accident as possible. When it slid open, it took me four staggering backwards steps to regain my balance. I was helped by a collision with a soft fragrant body that sounded like sliding papers and scudding shoes on the polished stone lobby floor.

"I command you to pick up my research," it said, the commanding voice.