You are here: Products The Coven’s Grove Chronicles: Omnibus 1-3 by Virginia Hunter 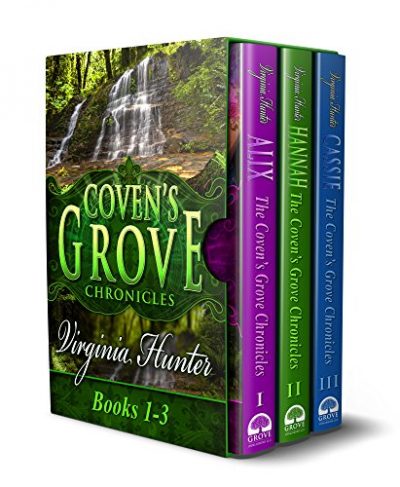 Building friendships isn’t easy…building a coven is even harder. The Coven’s Grove Chronicles is a saga about the gathering of thirteen women who possess extraordinary powers. Witches all, they must come together in a sisterhood that will nurture and protect them. The secrets of the arcane will be unlocked for each if they survive long enough to learn. Join them on their journeys of discovery and hardship, and of course, to meet the dashing men they find along the way.
The first three books of the Coven’s Grove Chronicles, Alix, Hannah, and Cassie have been wrapped up in one box set for your enjoyment and convenience. Be sure to check out the other books in the series!

Virginia was born in St. Louis, and has traveled much of the United States during the course of her life. Her journeys have allowed her to experience many wonderful things, and make many lifelong friends. Married for 19 years, Virginia met her husband in college and knew upon first laying eyes on him that she would bewitch him and become the mother of their two children.
Virginia has always enjoyed her supernatural stories to be flavored with a bit of steamy romance. The many stories she has read over the years inspired her to write about the things she loves most—titillating tales about sexy witches and the men lucky enough to be chosen by them. Her hope is that her readers will enjoy her stories as much as she has enjoyed reading the stories of countless others.

Be the first to review “The Coven’s Grove Chronicles: Omnibus 1-3 by Virginia Hunter” Cancel reply