You are here: Products The Confection Connection by Monica Tillery 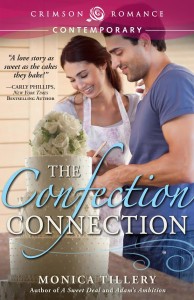 The Confection Connection by Monica Tillery

After appearing on a popular reality cooking show, Carly Piper’s newly opened bakery is landing her in debt. Making the cakes for the celebrity wedding of the year might be the answer to all her troubles.

Problem is, her rival from the show, Michael Welch, is also pitching his bakery to the celebrity couple. When a misunderstanding leads the quirky bride to think they’re a couple, she wants to hire them both.

Stuck traveling together to keep up appearances, the pair finds themselves cozying up to the idea of making their fake relationship real. But a once-in-a-lifetime opportunity leaves these two wondering whether they have the right recipe for success after all. Can Michael and Carly create something lasting or is their love a half-baked proposal?

I love cooking competition shows and decorating cakes, so the idea of two rival bakers being forced to work together intrigued me. I love finding ways for enemies to end up falling in love when that’s the last thing they thought they wanted.

Ensconced in the tiny decadent space, Carly concentrated on her breathing, reminding herself that her work was top-notch. Best to focus on the positive and try to forget how badly she needed the business. As the elevator slowed, she adjusted her bag on her shoulder and held her head high. The doors whooshed open, and silence greeted her. Silence, a near empty hallway, and Michael Welch.
He whistled innocently as she rolled her eyes. Without so much as flinching under her withering gaze, he brushed past her into the elevator. “Going up, Carly?”
He tapped the “close door” button and stood an inch away from her. Of course he would be here. Why hadn’t she anticipated that? She’d met Michael Welch three years ago when they were rival contestants on the Cuisine Network’s popular reality competition show Sugar Shock, where hopeful bakers battled to create exciting cakes and pastries and complete ridiculous challenges. His charisma, charm, and talent—combined with thick brown hair, a chiseled jaw, and piercing green eyes—made it hard for Carly to reconcile her attraction to him with her irritation. Everyone—show personnel, other contestants, the viewers—seemed to love him, but everything he did rubbed Carly the wrong way. He was almost too good-looking and too personable.
For Carly, the two high points of the Sugar Shock experience came on the day she found out she’d been accepted for that season and the day she was voted off and could get away from Michael. Spending months with him on set hadn’t endeared him to her, but he’d somehow managed to pull her under his magnetic spell. They’d shared a confusing and stupid kiss—moments before the challenge that sealed her fate, of course. No matter how much he protested and pleaded innocence, he knew what he was doing. She was thrown off her game and sent home, while he went on to compete in the final competition and won the whole thing. She wasn’t even disappointed to be eliminated so close to the end, since it was such a relief to finally be rid of him.
Even though it was clear she wasn’t cut out for cutthroat TV competitions, the experience and recognition that had come with the show brought new opportunities. Carly could finally open her own shop, where she happily spent her days creating beautiful confections to celebrate the most important days of her clients’ lives. The work was invigorating and satisfying, everything she’d ever wanted.
They reached their floor, and Carly set her mind to ignore the memories evoked by his too-familiar cinnamon-chocolate scent.
“Nervous, cupcake?”
“Of course.”
“Why? Because every hoity-toity bakery from here to Fort Worth is competing for the same job? Because you’ve suddenly decided that your cakes aren’t fancy enough for primetime? Or is it because you finally get to see me again after all these years?” He waggled his eyebrows suggestively, and the tension she’d been carrying around in her shoulders all day disappeared in a quick burst of laughter.
“Oh, yeah, that’s it.” She’d hoped for confident sarcasm, but heard a prim quality in her voice that made her cringe. Maybe breathing the same air would somehow help his confidence rub off on her. She ignored how warm her cheeks felt and gripped the handle of her bag.
“Come on. We got this.” There was no “we,” but she knew if she reminded him of that, he’d have a snappy comeback that would make her feel like a fool. He pulled his signature black skullcap tight over his head, his green eyes glinting with enthusiasm. Without asking, he commandeered her dolly and pulled it out of the elevator. “Let’s roll.”
– See more at: http://www.crimsonromance.com/contemporary-romance-novels/confection-connection/#sthash.CTpZiGvZ.dpuf