You are here: Products The Conduit by Phillip Macko 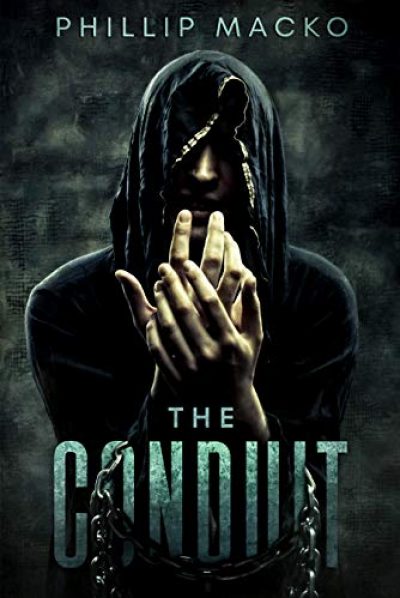 The Conduit by Phillip Macko

In the 1980’s, a cult known as The Celestial Temple shocked the world when its members died in a ceremonial mass suicide in the mountain community of Bolsiver they formed in Quebec, Canada. Three decades later to the day, an eerily similar ritual leads to death in a sleepy Illinois town.

Former counterintelligence officer turned author Nathan Badger walked away from covert operations for a quiet life of writing and rock climbing…until the night his missing lover Abby reappears in his driveway, tortured, disoriented, and determined to take her own life. When San Diego Sheriff’s Department Detective Drew Cavanaugh targets Badger as the prime suspect in Abby’s assault, he’s forced to dust off his sleuthing skills to focus on two simple goals: track down Abby’s abductors and bring them to justice.

Badger’s quest for answers plunges him deep into the nightmare world of his forgotten past. Every step in his investigation leads him closer to uncovering a link between Abby’s abduction and clandestine government experiments. Every discovery unlocks yet more memories he never knew existed. Memories connecting Badger to the events at Bolsiver, and to Paradign, a new age belief system brokering in the re-writing of its member’s perceptions. Memories powerful people will sacrifice anything to keep hidden. Memories placing the lives of Badger and countless others at risk…unless he can piece together the puzzle in time to stop another series of horrific crimes from occurring. Spanning the western hemisphere from the beaches of San Diego to the plateaus of Bogota, THE CONDUIT is an adult psychological thriller inspired by actual events

This just in – I've launched a Kickstarter campaign to fund an audiobook version of The Conduit.
Check it out here if you''d like to join. my community of supporters – https://www.kickstarter.com/profile/theconduitaudiobook.
The journey to my novel, THE CONDUIT, began when I opened a Time/ Life Magazine publication and learned that I'd been raised in what at the time was considered the world's largest cult.
Throughout my time serving in the Military Police through my adult life, the fascination with all things cult, conspiracy and true crime only grew.
My novel is the culmination of these fascinations, and is inspired by actual events.In my professional career I've had the honor of presenting to audiences from over one dozen countries worldwide,
and have done business throughout North/ South America, Scandinavia and Europe. Every one of these experiences has influenced my writing – especially my two non-fiction titles; Think Your Age, Don't Act It and Make Others Greater.
I live in the small town of Ramona, California with my wife, daughter and a Corgi named Hachi (who I nicknamed Dr. Anthony Hachi).
To learn more about me, please visit my website at https://phillipmacko.com/