You are here: Products The Chronicles of Koa: Netherworld by K.N. Lee 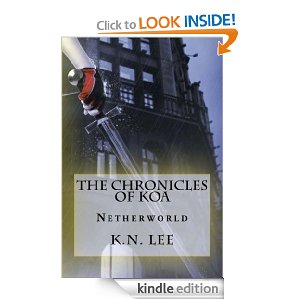 The Chronicles of Koa: Netherworld by K.N. Lee

What would you do if a demon threatened your mother’s life? If you’re like Koa, you’d sharpen your enchanted sword and go after him… Our world is threatened by the creatures of an alternate land called the Netherworld. Good thing Koa and the Netherworld division are there to keep the vampire population in check. Koa is a powerful half-blood with a mysterious past. Her best friend is her boss, she has a cursed mother, an enchanted sword, and an attractive human pet. Koa also has a problem. A Netherworld serial killer, with a taste for little girls, threatens everything Koa has worked hard to protect. Not even Koa’s boss, Halston can stop him. But he knows one prisoner that can. Too bad that prison is in the Netherworld. Is Koa ready to journey to the Netherworld to release the one creature that can break her mother’s curse and protect all that she holds dear?

Be the first to review “The Chronicles of Koa: Netherworld by K.N. Lee” Cancel reply