You are here: Products The Choices We Make by Barbara C. Doyle 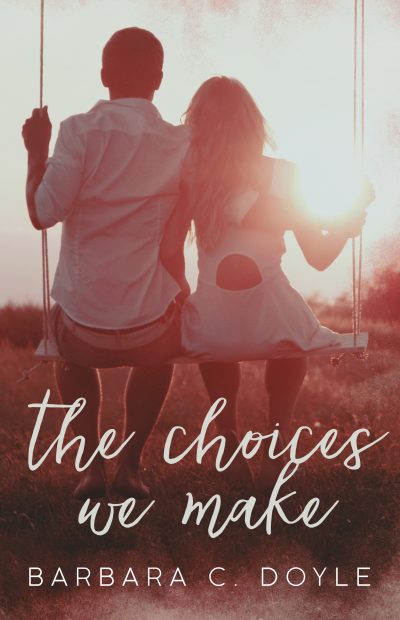 The Choices We Make by Barbara C. Doyle

We were the initials engraved in the bark of the town willow tree, with the expectation of forever whispering away to the fading tune of an old lullaby, and nothing but broken promises haunting our memories.

Six years have passed since Sebastian “Bash” Everly left behind high school sweetheart Opal Anderson to pursue his love of music. With his now world famous rock band, Relentless, on break from their continental tour, he returns home to small town USA hoping to win back the girl he left behind.

But nothing is the same in Clinton, New York. Old ghosts begin taunting the ex-lovers until their deepest secrets threaten to unravel their very fragile existence, leaving a trail of truth and lies in their wake.

While Bash hopes to rekindle what he’d regrettably left behind so many years ago, Opal holds onto the choices they’ve made in the past, letting them determine the fate of their future.

… if they even have one anymore.

Barbara C. Doyle grew up in small town USA where she still resides with her four-legged feline.

Her journey started at the young age of fourteen, and continued as she pursued a bachelors degree in English. She believes that the written word is best used as a mode to escape into a different reality, thus the birth of her novels.

When not writing new worlds, you can find her binge-watching Netflix, reading, attempting (and usually failing) to cook, and hanging out with her fur baby.

I wanted to write a romance that showed two types of love stories. I wanted to love both love interests in different ways, to make it hard for the reader to figure out which one to route for. Reality isn't having just one good love story – it's having to choose one out of many that you may have.

The taunting monotony of a new week is filled with the same soft hiss coming from the coffee maker as it brews my morning salvation. Usually the local news is humming in the background as I get breakfast ready but knowing that the band I watch it for won’t be in the headlines since their tour break, I only have the sizzling of the eggs in front of me to fill the cracks of my exhausted conscious.
“Mommy?” a soft voice calls.
And I have Addy.
I look over my shoulder at Addison, who’s sitting at the table focused on whatever she’s doodling in her princess coloring book. Her little nose scrunches and tongue darts out of her mouth whenever she’s invested in something.
Just like her Daddy.
There’s so much of both of us in her, sometimes it’s hard to divvy up what she got from each of us. Her hair is a mixture of her dad’s brown and my red, almost like she has auburn highlights in her wavy brunette tresses. I envy the color, just like a lot of people say they envy my natural burnt red tone. She gets her eyes from me, silver, with the slightest blue outlines around the edges, but she gets his thick dark eyelashes that make them pop the brightest blue.
Unfortunately, she’s pale like me. Although, she does tend to tan better than I do in the summer. Me? I just burn. Addy turns a golden brown and teases me for looking like a lobster.
But everything else, her nose, the shape of her eyes, the fullness of her bottom lip compared to the top, they’re all her dad. Looking at her is like seeing a piece of the past survive when we went up in flames.
“What is it, monkey?” I ask.
“Can I have waffles?”
I look down at the eggs frying in the pan, shoulders slumping at the request, until two hands wrap around my waist and kisses are peppered on my shoulder.
“I can make her some,” Noah says against my bare shoulder.
“You made her waffles yesterday,” I reply, frowning at the protein wasting away in the pan. “She should really eat something healthier.”
Noah steps back, taking the pan from me, sliding the eggs onto a paper plate. “I’ll put at least one of these on the waffles,” he bargains.
I roll my eyes. Addy has him wrapped around her little finger, and he knows it. “Noah, she really doesn’t need waffles.”
“Yes, I do,” Addy disagrees.
I rub my fists into my tired lids, not having the energy to fight with my six year old. “Fine, but no more waffles for a while. I already fed you fast food twice this week and we need to start cleaning up our diets.”
Noah moves my hands away from my face, his warm hazel eyes studying me. Today, they’re predominantly brown, although the rims are a pretty shade of emerald speckled with gold flecks. “You didn’t fall back asleep last night, did you?”
I bite my bottom lip, unable to lie to him.
He sighs. “Opal, why don’t you go back to bed? You look beat. I can finish cooking Addy breakfast and get her ready for school.”
The sentiment melts the thin layer of ice that has coated my heart since yesterday. Noah has the uncanny ability to be my warmth when I need it, thawing my vulnerabilities.
He squeezes my wrists and lets them go. “I have a feeling I know why you’re on edge.”
My lips twitch. “Not now.” I look over at Addison, not wanting her to listen in on the conversation.
He takes over the kitchen, grabbing what he needs to whip up a batch of waffles before Addy leaves for school. A quick glance at me shows the understanding dwelling in his eyes.
“Okay,” he agrees with a small smile. “We’ll talk about it later. Go get some sleep. I’ll make sure she gets to school, all right?”
My heart tugs in my chest. Watching Noah and Addy is like staring at a masterpiece in an art exhibit—it’s consuming, with a million emotions trying to drown you at once. But you embrace them all, thinking drowning wouldn’t be so bad if you have the right person to save you.
Swallowing, I say, “Okay.”
He gives me a peck on the cheek and smacks my butt as I turn around. I kiss my baby girl’s head, wish her a good day at school, and crawl back in bed hoping for a few extra hours of sleep before my shift at the café.

Be the first to review “The Choices We Make by Barbara C. Doyle” Cancel reply