You are here: Products The Chieftain Needs an Heir – a Highland ménage novella by Jonnet Carmichael 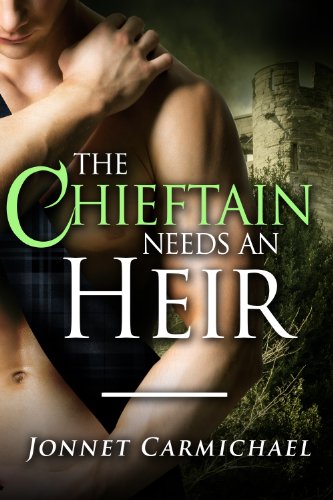 Clan MacKrannan is rumoured to have many strange and secret traditions from centuries past. The chieftain Niall and his wife Sorcha discover just how peculiar they are when the Heir’s Cradle is still empty after many moons. A special fertility ritual is called for – the ‘REMEDIE FOR WYFES TOO TALLE’. Niall knows his heart belongs to Sorcha, despite his absences to go wenching. He must accept the hard life lesson that believing is never quite as beneficial as seeing. Sorcha knows that all the clan’s enacted Traditions are witnessed. What she must accept is that witnesses sometimes join in…

Jonnet Carmichael is the pen-name of a Scottish writer with a background in the history of her special country, and the erotica series ‘Clan MacKrannan’s Secret Traditions’ is her first foray into fiction.

It’s surprising how much Celtic and pagan folklore still turns up in our everyday customs and superstitions. Fertility rituals were an especially vital part of our ancestors’ lives, so I let my imagination run wild and free with the Green Man, the Wisewomen and the bees…

Sample from Book:
From: “The Chieftain Needs an Heir” by Jonnet Carmichael
The magic of the chamber gave Sorcha no care for modesty. She stepped off the star and pulled the robe over her head, her nipples aching afresh with the friction of the passing fabric and her flaxen hair flying down her back to tease the cheeks already hot from the fire.
Niall had his shirt off before Sorcha’s robe hit the floor. And as he watched this goddess slowly come to him, he unbuckled the belt to loose his great-kilt and lobbed the bundle of garments over to his own star.
One more step would bring them together, all clothing and restraint left in the past.
Sorcha was too eager for the Tradition to accept the embrace he offered. Her outstretched arms were for the arch, not her husband. Her hands met its sides, just less than her full armspan, and she took irrevocable hold. Moving her grip upwards through the leaves to assess the comfort of the curve, she saw the appeal of her situation in Niall’s eyes.
The bees’ song grew louder as Niall reached for the crockpot of honey. He hadna been sure… but now he knew exactly what the supply was intended for. His thumb lightly smeared her lips, and his mouth followed to slowly lick the runny nectar off. Sorcha gasped at the touch of his tongue, and strained for his kiss, but he was gone, only for both his thumbs to return with honey to smear a line along her chin. This time his mouth latched on and she turned her head to encourage his gathering up the nectar. His mouth did not leave her as he smeared more honey on her ear and licked it away, his hot breath sending a tremor through her. Then he fed her the honey, and she sucked his fingers clean. He gave her the lightest of kisses and reached again to the pot.
Forbidden to speak, Sorcha could not tell him the places she craved the honey, knowing now that his wicked mouth would follow. She thrust her breasts at him urgently, but his thumbs instead made lines from her grasping fingers along the insides of her arms. She needed more on her lips, and his full long kisses, yet he reached round to smear the honey on her nether cheeks. Why was he teasing her so? Could he not see how afire this was making her, how she ached all the more for him to be inside her?
Niall knew fine the state his wife was in, for he’d had her from virgin and discovered every one of her sensitive places and just how much she could stand. For many moons they had played like this, once even with a pile of wild strawberries he’d put in some interesting hollows, until her desperation for a bairn had changed their bedplay. Always she wanted him inside her right away and emptying his ballocks as quick as she could make it happen, and then reviving him for more. More often than not he’d been sent behind her for his first Spend, for that was how bairns were easiest gotten.
He’d missed this. The stoking up of the passion until it became unbearable, until all sense of place and time was gone. Sorcha needed this reminding of how it could be again.
She could no’ dominate this coupling wi’ her interrupting pleas for just the right conceiving angle, and the putting aside of her own joy in the need for him to Spend. His cock throbbed hard, even without her eager rousing. This time he’d be the one deciding who was ready. One position. One bliss for her. One Spend for him. And he’d be in charge of it all.